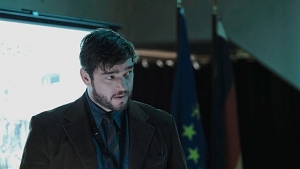 Martin Behrens is a Middle East expert for the German intelligence agency BND. He obtains information leading to a U.S. drone strike on a wanted terrorist in Zahiristan. A few days later, there’s a terrorist attack on a restaurant – the video claiming responsibility calls it payback for the drone strike. Freelance journalist Aurice, with whom Martin was having an affair, is among the victims – she was investigating corruption at the heart of the BND. Martin soon has to realize that in a world where big corporations profit from arms deals as well as from homeland security contracts, good and evil are sometimes hard to tell apart.