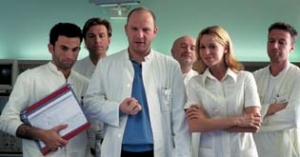 Martin is the ambitious one in the family. He is poised to start on his doctorate, when he is diagnosed with testicular cancer and all his future plans begin to unravel.

The removal of one testicle reduces the most immediate threat, but the cancer has already spread and Martin′s doctor argues for an operation that would save him, but could also castrate him. Martin refuses to risk the remainder of his manhood and instead chooses a long and painful chemotherapy, a treatment which offers no guarantees. The cancer ward now becomes Martin’s new home, patients Susanne, Harry and Nickel his new friends and fellow sufferers. Martin falls in love with Susanne and grows attached to Harry and Nickel, but he is still haunted by a vague feeling of loss. Convinced that he needs his missing testicle to feel complete again, he and his friends set out on a foolhardy yet uplifting mission to the hospital′s most secret chambers, where they not only have a ball, but bring one back as well…