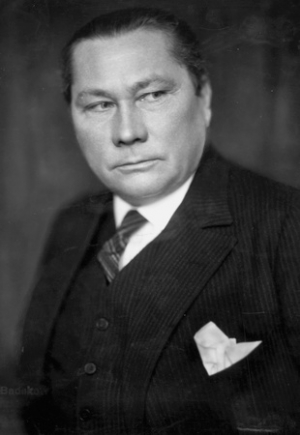 Paul Wegener was born December 11, 1874, in the West Prussian village of Arnoldsdorf (today: Jarantowice, Poland). He grew up on his father"s estate Bischdorf in Ermland before he was sent to Rössel in 1883, and later to Königsberg, to attend secondary school. As a school boy Wegener already appeared on stage as an extra at Königsberger Stadttheater. After finishing school in 1894, he started to study law in Freiburg (Breisgau) and in Leipzig but dropped out of university already one year later to start a career as an actor. Wegener attended actor"s training and between 1895 and 1903 got smaller engagements at Stadttheater Rostock, in Aachen, or in Wiesbaden. Then, Max Reinhardt saw Wegener in a production of Maxim Gorky"s "The Lower Depths" in Hamburg and took him to his theatre in Berlin in 1906. There, Wegener became one of the best-known German theatre actors during the following years in productions of classical plays such as "Richard III" or "Mephisto". In 1914, Wegener volunteered for military service, but was sent back to Berlin in 1915 for health reasons. He then performed at numerous German theatres and made guest performances abroad.

In 1913, Wegener made his movie debut in Stellan Rye"s "Der Student von Prag" ("The Student of Prague"). He also wrote the screenplay to the film together with writer Hanns Heinz Ewers and cinematographer Guido Seeber. Besides Max Mack"s "Der Andere" ("The Other", 1913), "Der Student von Prag" is considered to be the first artistically important film of German cinema. In the film, the imagery is detached from the film"s plot and fantastic elements are integrated into the film. These characteristics also influenced Wegener"s next films as director and actor, for instance, "Rübezahls Hochzeit" ("Old Nip"s Wedding"), "Der Rattenfänger" ("The Pied Piper"), and the internationally successful and highly praised "Der Golem, wie er in die Welt kam" ("The Golem") that still ranks as one of the few classic films of the German silent movie era.

Again and again, Wegener portrayed characters from different cultural spheres and blended images informed by Western culture with his completely personal fascination for the Far East, for instance, in "Der Yoghi" (1916) and in "Lebende Buddhas" ("Living Buddhas", 1924). In 1926, he was hired by the Hollywood studio MGM for the mystery thriller "The Magician", starring Rex Ingram – and again Wegener played an enigmatic occultist in the Somerset Maugham adaptation.

With the advent of the sound film and with the takeover of the National Socialists, Wegener"s influence as a filmmaker faded. Although he was still one of the best-known and regarded actors on stage (for instance under the direction of Heinrich George and Gustaf Gründgens), he was mainly seen in light entertainment movies in the 1930s cinema. At times, Wegener also appeared in propaganda movies – and mostly in adverse roles: In 1933, he played a communist in the Horst Wessel glorification "Hans Westmar", or in 1945, as weak townmayor in Veit Harlan"s morale booster movie "Kolberg" ("Burning Hearts").

Between 1933 and 1937, Wegener also directed a number of genre films. Nevertheless, he was permitted by the Soviet occupators to perform again after the end of the war: During the first post-war years, Wegener was one of the leading founders of Kulturbund zur Erneuerung Deutschlands. On stage, he made a memorable performance as "Nathan der Weise" ("Nathan the Wise") at Deutsches Theater in 1945. In 1948, he made his last performance on the movie screen in "The Mandarin.