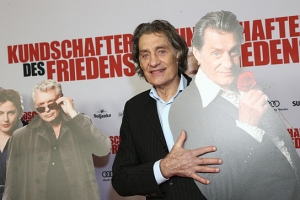 Winfried Glatzeder at the world premiere of "Kundschafter des Friedens" in Berlin on January 17, 2017

Winfried Glatzeder was born April 26, 1945, in Zoppot (now Sopot, Poland). His father, a doctor, died in war captivity and his mother was a social welfare worker. He grew up in Berlin, where he obtained his A-levels. During his training as a mechanical engineer, he launched a cabaret group at his vocational school.

From 1965 until 1969, he studied acting at the "Konrad Wolf" Academy for Film and Television in Potsdam-Babelsberg, where his teachers included Fritz Marquardt and B. K. Tragelehn. In 1969, he graduated with a thesis on the figure of the clown.

From 1969 until 1971, he was engaged at the Hans-Otto-Theater in Potsdam, where his roles included Geronte in Molière's "Les fourberies de Scapin" (1967), Probstein in Heiner Müller's Shakespeare adaptation "As You Like It" (1969, directed by B. K. Tragelehn), and the drunken actor in Gorki's "The Lower Depths" (1971, also for TV).

From 1971 until 1982, he joined the ensemble of the Volksbühne Berlin, where he repeatedly played funny roles in productions staged by Fritz Marquardt, for example in premiere productions of stage plays written by Heiner Müller (Blessierter in "Weiberkomödie", 1971; Treiber in "Die Bauern", 1975) and in Bartsch's Molière adaptation "Der Menschenhasser" (1975, also for TV).

In addition, he played the unemployed pilot Yang Sun in Brecht's "The Good Person of Szechwan" (1971, directed by Benno Besson), Jacques in "As You Like It" (1975), and the first clown/gravedigger in "Hamlet" (1977). In 1977, Karge and Langhoff gave him the role of Vater Märten in their controversial production of Goethe's comedy "Der Bürgergeneral”.

After playing some minor parts in DEFA films, the tall and lean actor attracted attention with his portrayal of the oil worker Christian in Siegfried Kühn's "Zeit der Störche" ("Time of the Storks"): "Glatzeder embodies a type missing in the last DEFA films: the juvenile daredevil, the attractive fellow who does not fit into any didactical pattern" (Kino-Eule). Female reviewers fancied his "dark hair", his "bright and demanding eyes", and his "bold boxer’s nose" (Rehahn, 1972).

Regarded as a sort of GDR Belmondo, Glatzeder became a star in the early 1970s with two comedies. In Roland Oehme's "Der Mann, der nach der Oma kam" he played the "surrogate grandmother" Erwin Graffunda, and in Heiner Carow's "Die Legende von Paul und Paula" ("The Legend of Paul and Paula") he portrayed the ambitious foreign trade consultant Paul who gives up his career in order to save his love for Paula.

Subsequently, he played the leading role in Rainer Simon's "Till Eulenspiegel". "There can be no doubt that this is the perfect role for him. But he brings more to the part. As portrayed by him, Eulenspiegel unconsciously keeps playing his risky game and he keeps getting punished for it. In the end, he is a poor-stricken dog who has learned some lessons without being able quit his foolish behavior. It is Glatzeder’s most sophisticated, and possibly most difficult, performance to date." (G. Sobe, Berliner Zeitung, 5/27/1975).

Glatzeder, who completed a six-month study at an artist's school in order to prepare himself for the part of Till Eulenspiegel, impressed the audience "with his deep sense for the body movements of his character. His performance is characterized by vitality and sensuality, which in my opinion stems from love for life. He gives us a sense of what it means to live life to the fullest" (Römhild, 1979).

Sometimes Glatzeder can even resort to his diploma thesis on clowns, e.g. in "Das zweite Leben des Friedrich Wilhelm Georg Platow" or in late 1976, when he played the clown Dolli on children's TV.

In 1982, Glatzeder and his family moved to West Berlin, where he was engaged at the Schillertheater. From 1983, he worked exclusively for film and television. He made his debut on West German television in Peter Beauvais' movie "Der Kunstfehler". Subsequently, he starred alongside Dieter Hallervorden in Schwabenitzky's comedy "Didi – Der Doppelgänger" ("Non-Stop Trouble with My Double"), in Helmuth Ashley's action movie "Danger – keine Zeit zu sterben" ("No Time to Die"), and in Slavo Luther's "Vergesst Mozart" ("Forget Mozart").

Furthermore, he played the leading role in Diethard Küster's "Va Banque" as well as in TV movies such as Berengar Pfahl’s East-West-story "Brücke am schwarzen Fluss" and Eberhard Itzenplitz's Silone adaptation "Acht Tage in den Bergen". Margarethe von Trotta gave him the role of Paul Levi in her movie "Rosa Luxemburg". In Stephan Meyer's lively spy comedy "Schlüsselblumen", he played a member of the Stasi who is supposed to spy on a secretary and gets emotionally entangled in an East-West-relationship.

In 1987, Glatzeder returned to the theater. At the Schauspielhaus Düsseldorf, where he gave guest performances until 1996, he played the role of Malvolio in B.K. Tragelehn's staging of "As You Like It" (1987), as well as Scanarelle in Heiner Müller's adaptation of Moliére's "Don Juan” (1988).

It was not until 1990/1992 that Glatzeder starred in another DEFA film (Jürgen Brauer's "Tanz auf der Kippe" and Herwig Kipping's "Land hinter dem Regenbogen"). Apart from a cameo appearance in "Sonnenallee", he solely worked for television until the late 1990s, starring in several episodes of different family and crime series. From 1996 until 1998, he portrayed the police commissioner Roiter in twelve "Tatort" episodes.

During the following years, Glatzeder devoted himself to the theatre again, the only exception being his role in the children’s film "Pinky und der 1.000.000 Mops" ("Pinky and the Million Dollar Pug", 2001). He mainly performed at the Theater am Kurfürstendamm in Berlin.

He occasionally appeared in TV productions and also had turns in feature releases like Barbara Albert's "Die Lebenden" (2012) and Peter Kern's "Der letzte Sommer der Reichen" ("The Last Summer of the Rich", 2015), which premiered at the 2015 Berlin IFF. In 2014, Glatzeder was one of the celebrity participants in the highly popular reality TV show format "Ich bin ein Star, holt mich hier raus!".

On the big screen he was seen in 2017 in Robert Thalheim's spy comedy "Kundschafter des Friedens" ("Old Agent Men") alongside Henry Hübchen and Michael Gwisdek as ex-GDR secret agents. In the second season of the Netflix series "Dark" (2019) he played the main character of policeman Ulrich Nielsen in the 1987 scenes.