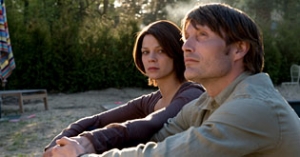 The mystery thriller′s action centers on the formerly successful painter David who has lost control over his life after being responsible for the death of his seven-year-old daughter Leonie through a fatal decision. One day, five years later, he discovers a door which will give him the opportunity to start all over again. However, what initially appears to be a wonderful chance for a new beginning, soon turns out to be a veritable horror scenario, since not everything in the past is quite as it seems.