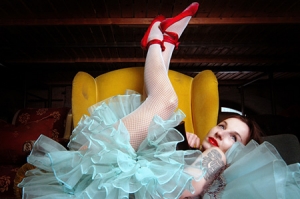 Meret Becker, born January 15, 1969, in Bremen, is the daughter of the actors Monika Hansen and Rolf Becker. When Meret was five, her parents separated. Meret and her brother, Ben Becker, stayed with her mother who then married the actor Otto Sander.

Meret Becker started her acting career already at the age of five in the TV series "Rappelkiste", an anti-authoritarian children’s program that in a way already forestalled many of Becker’s later roles of strong-willed and non-conformist characters. After several smaller parts in the TV series "Auf Achse" alongside Manfred Krug and in Bernhard Sinkel's drama "Kaltgestellt" ("Put on Ice"), Becker started her actual acting career at the age of eleven alongside her step-father Otto Sander and the legendary Curt Bois in the TV movie "Der Mond scheint über Kylenamone". At the age of 17, Becker dropped out of school against her step-father’s advice to focus completely on acting.

In the beginning of the 1990s, Becker made her breakthrough in three films directed by Doris Dörrie and Sönke Wortmann. In Wortmann's film "Allein unter Frauen" ("Alone Among Women", 1991), Becker portrayed a shy member of a girls' flat share. In Dörrie's film "Happy Birthday, Türke" ("Happy Birthday!", 1992), she played a convincing Lolita prostitute and in Wortmann's cult film "Kleine Haie" ("Acting It Out", 1992), Becker brilliantly played an eccentric street musician. In 1992, Becker won the Adolf Grimme award as "Best female newcomer". Two years later, she also won the Bavarian film award as "best supporting actress" for her portrayal of the mentally unstable widow of a police officer in Dominik Graf's thriller "Die Sieger" ("The Invincibles ").

In the following years, Becker made brilliant performances, portraying characters who are at the same time bizarre as well as sensitive and at the same rebellious as well as looking for support. All of those characters are outsiders whose straightforwardness and outspokenness often comes across as a protective shield against insults and emotional hurt. Becker played characters of this kind for instance in "Das Versprechen" ("The Promise", 1994), "Das Leben ist eine Baustelle" ("Life Is All You Get", 1995) or "Comedian Harmonists", which won her the German film award in 1998 as "best supporting actress".

Besides her acting career, Meret Becker is also a successful musician and chanson singer (for instance with the cabaret ensemble "Ars Vitalis"). She was married to Alexander Hacke, the guitarist of the band "Einstürzende Neubauten", from 1996 to 2002.

Despite her singing career and her sporadic theatre performances, Becker is still one of most active actresses of German cinema. Until now, she has starred in more than 60 films and TV movies, always alternating between mainstream productions and ambitious independent productions. Thus, she recently appeared in "Arthouse" productions such as "Unkenrufe" "Call of the Toad", in independent films such as "Urlaub vom Leben" (2005) and "Komm näher" ("Happy As One", 2006), in Hollywood movies such as "Munich" (2005), and in mainstream entertainment films such as the comedy "Meine schöne Bescherung" (2007).