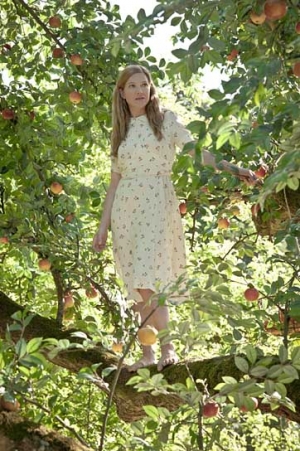 The Taste of Apple Seeds

When Bertha dies, her granddaughter Iris inherits her house and finds herself back in the home where she and her cousin used to play dressing-up in the summer holidays. She wanders through the rooms and garden, a timeless world where red currants turn white overnight, where a tree blossoms twice, villages vanish and women shake sparks out of their fingers. But the garden is now wild and overgrown. After she fell out of the apple tree, Bertha became absent-minded, then forgetful. Eventually, she didn't even recognize her own three daughters. Iris stays in the house on her own for a week. She cannot decide whether she wants to keep it. She swims in a black lake, receives a visitor, kisses an old friend's brother and paints a wall.

While she wanders from room to room, she gropes her way through memories and things she had forgotten: What did her grandfather really do before he went to war? Which men were Bertha's daughters in love with? Who ate his apple with the seeds? Finally, Iris recalls the night her cousin Rosmarie had the terrible accident: What was Rosmarie doing on the conservatory roof? What did she want to tell Iris? Iris senses there are several ways to forget. And remembering is only one of them.