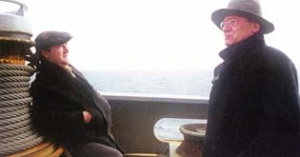 This film is an hommage to the poet who - like no other German writer in exile - has expressed the plight of his compatriots during the Nazi regime and the crimes committed by the oppressors.

In the scenes from "Baal", "Dreigroschenoper", "Furcht und Elend des Dritten Reiches", "Fluechtlingsgespraeche" and in poems, songs and autobiographical notes which are interwoven with each other, we discover an image of Germany as it was then and as it is now, how very much Brecht is still our contemporary: ....."what people, made of what kind of humans, in what kind of state, with what kind of thoughts." Bertolt Brecht