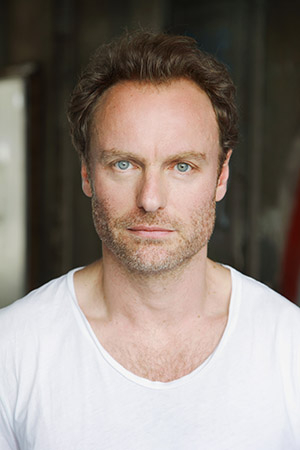 Mark Waschke was born in Wattenscheid on March 10 1972. He studied at the renowned Ernst Busch acting academy in Berlin, and in 1999, he joined the ensemble of the Berliner Schaubühne. Over the years, he played in numerous productions of classic and modern plays, including Brecht's "Mann ist Mann", Dresser's "Goldene Zeiten", Williams' "Cat On A Hot Tin Roof" and Czechov's "Kirschgarten".

In 2007, he made his screen debut in Angela Schanelec's "Nachmittag", followed by a supporting role in Tom Zenker's "Der blinde Fleck". His breakthrough came with the role of Thomas Buddenbrook in Heinrich Breloer's adaptation of Thomas Mann's "Buddenbrooks". His performance as the father of a kidnapped child in Matti Geschonneck's acclaimed TV drama "Entführt" and his portrayal of a betrayed husband in Christoph Hochhäusler's "Unter dir die Stadt" (2010) further established him as a prolific character actor. Since February 2010, he also plays the role of detective Nadir Taraki in "Radio Tatort".

In 2012, he joined Nina Hoss and Robert Zehrfeld in Christian Petzold's acclaimed drama "Barbara" and played opposite Stipe Erçeg and Bernadette Heerwagen in the thriller "Schilf – Alles, was denkbar ist, exisitert". In Hendrik Handloegten's horror film "Sechzehneichen" (2012, TV) he played a father who moves with his family into a gated community which hides a terrible secret. Nicole Weegmann cast him as a violent husband in the highly acclaimed TV drama "Es ist alles in Ordnung" ("Everything Is Alright", 2013). On the big screen, Waschke was seen alongside Sylvester Groth and Marie Bäumer in the psychological thriller "Zum Geburtstag" ("A Pact", DE/FR 2013).

Waschke had supporting roles as a mean German in the Mossad thriller "Aus nächster Distanz" ("Shelter", DE/FR/IL 2017), as an introverted cook in the social satire "Was uns nicht umbringt" ("What Doesn't Kill Us", 2018) and as a village blacksmith in Terrence Malick's "A Hidden Life" (2019). He played a leading role as an estranged father in the intimate family drama "Der Geburtstag" ("Many Happy Returns", 2019).

From 2015 Waschke has been playing a detective inspector alongside Meret Becker in the crime series "Tatort". From 2017 to 2020 he appeared as the mysterious, seemingly ageless pastor Noah in the Netflix series "Dark". At the same time, he was seen in the Sky series "8 Tage" ("8 Days", 2019) as a family man who wants to escape with his wife and children from an impending asteroid impact in Russia.

In addition to his work in front of the camera, Mark Waschke has been appearing in stage productions at the Berlin Schaubühne.