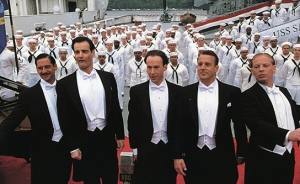 In 1927, the 20-year-old Berlin drama student Harry Frommermann makes up his mind to found a German singing group modelled on the feted American a-capella formation "The Revellers". He places an advertisement and, very soon, he is snowed under with candidates.

After initial difficulties, the band′s first appearance is a great success. A German tour follows and it′s not long before the Comedian Harmonists are on every-body′s lips. But the enormous success makes the young men blind to the changing political situation. None of the six wants to take Hitler′s rise to power seriously although three members of the troupe are Jews... Six men, six voices, six fates - Joseph Vilsmaier′s film version of the rise and fall of the legendary Berlin ensemble Comedian Harmonists who started an international career at the end of the20s and fell victim to the National Socialist racial policy only a few years later.