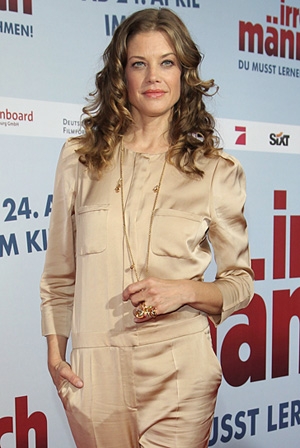 Marie Bäumer at the premiere of "Irre sind männlich" in Munich on April 10, 2014

Marie Bäumer was born May 7, 1969, in Düsseldorf. After finishing school, she studied at Scuola Dimitri in Tessin and at Hamburg's "Studio 033". Bäumer then attended Hochschule für Musik und darstellende Kunst in Hamburg and finished her actor's training in 1997 under Jutta Hoffmann. Already during actor's training, Bäumer performed in several productions at Hamburger Kammerspiele.

In 1995, Bäumer made her highly praised movie debut in Detlev Buck's comedy "Männerpension" ("Jailbirds"). One year later, Bäumer, who was compared to the young Romy Schneider by several critics, proved her versatility in the horror thriller "Sieben Monde" ("Night Time"). In 2001, Bäumer made her breakthrough performance in the role of bar singer Uschi in "Der Schuh des Manitu" ("Manitou's Shoe"). In "Der alte Affe Angst" ("Angst", 2003) she again proved to be a subtle character actress: Her portrayal of nurse Marie who fights for her husband's love won Bäumer the Bavarian film prize and the prize of Film Critics. Beside her movie work, Bäumer is regularly seen in elaborate TV productions like Roland Suso Richter's "Dresden" and Stefan Krohmer's "Ein toter Bruder".

After a little Role in the Oscar-winning drama "Die Fälscher" ("The Counterfeiters", 2007) by Stefan Ruzowitzky Marie Bäumer's next leading role in the cinema was in Nicolai Rohde's "10 Sekunden" ("10 Seconds", 2008). As the wife of a flight controller feeling guilty for an air crash she tries to escape this emotional burden by beginning an affair.

In her subsequent film, Bäumer also had to live through an emotionally exceptional situation: In Sebastian Schipper's "Mitte Ende August" ("Sometime in August", 2009), she played a woman, happily in love, whose feelings are put to a test by her boyfriend's brother.

In 2010, Bäumer's performance in Dominik Graf's award-winning mini-series "Im Angesicht des Verbrechens" as a mobster wife who takes care of "family business" after her husband has died was critically acclaimed. Portraying Hedda Adlon in the three-part TV feature "Das Adlon. Eine Familiensaga" (2012) earned her the Austrian film prize "Romy" as the "most popular actress".

In 2013, Marie Bäumer starred in two ambitious feature films: In Denis Dercourt's psychodrama "Zum Geburtstag" ("The Pact") she played a bourgeois wife hard-pushed by an old pact between her husband and one of his former schoolmates. In "Der Geschmack von Apfelkernen" ("The Taste of Apple Seeds") she was cast as a woman confronted with a tragic chapter of family history.

Lighter fare was the comedy "Irre sind männlich" (2014), in which Bäumer plays the cunning participant of a therapy group who sees right through two conmen. In the French TV drama "Intime conviction" (2014), she starred as an alleged suicide, and a year later she appeared in a small role in the French film "En équilibre" ("In Harmony"). For her lead role in Urs Egger's "Brief an mein Leben" (2016, TV) about a burnout victim, she was awarded the prize for Best Actress at the Festival International de Programmes Audiovisuels in Biarritz (France). She collaborated again with Urs Eggers, starring in his two-part TV film "Gotthard" (2016) about the construction of the tunnel of the same name.

After playing the lead role in the tragic comedy "Ferien vom Leben" (2017, TV), Marie Bäumer portrayed the legendary Romy Schneider in Emily Atef's "3 Tage in Quiberon" ("3 Days in Quiberon", DE/AT/FR 2017). The film based on a short episode in Schneider’s life, premiered in the Berlinale Competition in 2018.