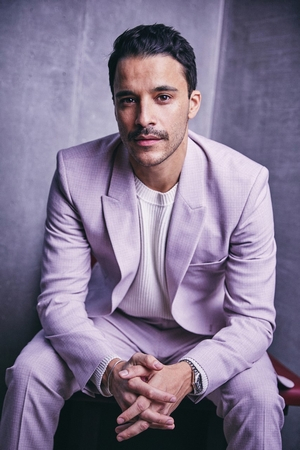 Kostja Ullmann, born 1984 in Hamburg, entered the stage at the age of eleven and performed at Hamburg's Ernst-Deutsch-Theater and Winterhuder Fährhaus. In 1998, he made his TV debut in a minor part in the crime series "Alphateam". In the following years, Ullmann starred in several minor roles in TV series such as "Stahlnetz", "Großstadtrevier", and "SOKO Leipzig" as well as in TV movies such as the drama "Albtraum einer Ehe" (2001) alongside August Zirner.

From 1999 to 2000, he was a cast member of the comedy series "Zwei Männer am Herd" with Wolfgang Fierek and Florian Fitz. In 2004, Kostja Ullmann made his movie debut in a leading role in Marco Kreuzpaintner's award-winning film "Sommersturm" ("Summer Storm"). His performance in the romantic TV drama "Heimliche Liebe" about the relationship of a schoolboy and an older woman won Ullmann the "Günther-Strack-Fernsehpreis" as "Best actor" in 2006. In his second movie, "Verfolgt" (2006), Ullmann stars in a similar role: Directed by Angelina Maccarone, he plays a young delinquent who engages in an "amour fou" with his probation officer who is 30 years older than him. The film won a "Golden Leopard" at the 2006 Locarno International Film Festival.

The years 2007 and 2008 have been among the most productive years of Ullmann's career. He was seen in eight TV and movie productions, including the ensemble comedy "Stellungswechsel" ("Special Escort ", 2007) and Hans-Christoph Blumenberg's eagerly awaited comedy "Warten auf Angelina" ("Waiting For Angelina "), also starring Florian Lukas.

For his performance in the television drama "Das Wunder von Berlin" (2008) he is awarded with a Bavarian Television Award as Best Actor. After a small role in "Die wilden Hühner und das Leben" ("The Wild Chicks and Life", 2009) he again plays a lead role in 2010 in "Groupies bleiben nicht zum Frühstück". In the film by director Marc Rothemund he plays an adored pop star who falls in love with a girl that doesn't even know he's famous.

On the big screen, Ullmann appeared in a string of prolific supporting roles: He played the younger incarnation of lead actor's Moritz Bleibtreu's character in Oskar Roehler's family epic "Quellen des Lebens" (2013), portrayed James, a ghost living in a school, in the screen adaptations of the young adult fantasy novels "Rubinrot" (2013) and "Saphirblau" (2014), starred in the comedy "Großstadtklein" and played a member of an anti-terror unit in the screen version of John Le Carré's "A Most Wanted Man" (2014).

Kostja Ullmann was cast as the male lead in Marco Kreuzpaintner's comedy "Coming In", in which he plays a celebrated, openly gay hairdresser for men who wants to advance his skills with female customers and therefore takes on a job in an inner-city salon.

During the following years, Ullmann kept starring in comedy films: He played a babysitter in "3 Türken und ein Baby" (2015, Director: Sinan Akkuş), a snotty wedding planner in "Heiraten ist nichts für Feiglinge" (2015, TV, Director: Holger Haase) and an ambitious teacher trainee in "Bibi und Tina 3 - Mädchen gegen Jungs" (2016, Director: Detlev Buck). In Marc Rothemund's humorous adaptation of Saliya Kahawatte’s autobiography "Mein Blind Date mit dem Leben" ("My Blind Date with Life", 2016), Ullmann portrayed the main character, a nearly blind person, who makes a career as a waiter. André Erkau cast him for his comedy "Happy Burnout" (2017) as a mentally instable ventriloquist. Detlev Buck's "Wuff - Folge dem Hund" (2018), too, was a comedy film in which Ullmann played the new lover of a woman who had just been left by her partner.

Ullmann also remained a sought-after actor for television productions. His numerous works include the romantic comedy "Heiraten ist nichts für Feiglinge" (2016), the last part of the Lotta film series "Lotta & der Ernst des Lebens" (2017) and the adventure film "Kilimandscharo - Reise ins Leben" (2017). Ullmann played a psychopath in the thriller series "Beat" (2018), an undercover investigator in the "Tatort" episode "Wo ist nur mein Schatz geblieben?" (2019) and the title role in the dramedy series "Aus dem Tagebuch eines Uber-Fahrers" (2020). In early 2021 he could be seen in "Meeresleuchten", about the new beginning of a grieving father (Ulrich Tukur), in a supporting role as an artist.

In April 2021, Ullmann stood in front of the camera for the children's feature film "Lucy ist jetzt Gangster", in which he plays the father of the young title character.