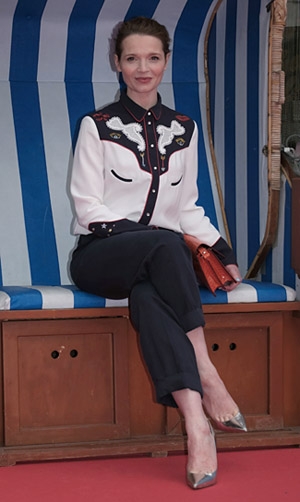 At the premiere of "Rico, Oskar und der Diebstahlstein" in Berlin on April 10, 2016

Karoline Herfurth was born in Berlin on May 22nd 1984. While still in school, she gathered her first acting experiences in TV productions, followed by her screen debut in Hans-Christian Schmid's acclaimed youth drama "Crazy" in 2000.

The following year, Karoline Herfurth got her first leading role in the coming-of-age comedy "Mädchen, Mädchen" ("Girls on Top") directed by Dennis Gansel. Made in the vein of American teen comedies, the film became a box-office hit and was followed by the sequel "Mädchen, Mädchen 2 – Loft oder Liebe" ("Girls on Top 2") in 2004. Before reprising her role, Herfurth played one of the leads in the drama "Große Mädchen weinen nicht" ("Big Girls Don't Cry, 2002), appeared in the period piece "Mein Name ist Bach" (2003) and graduated from school.

In Buket Alakus' "Eine andere Liga" ("Offside", 2005), Herfurth plays the role of Hayat, a girl of German-Turkish descent, who is raised in Hamburg by her widowed father. Hayat is an accomplished and passionate soccer player, but when a cancer tumour leads to the amputation of one of her breasts, her life on and off the field is thrown into turmoil. With her subtle portrayal of a young woman who slowly regains her physical and emotional balance and finds love along the way, Karoline Herfurth established herself as one of the most versatile young actresses in German Cinema. Critics unanimously praised the film and its star, and in 2008, the cast and crew of "Eine andere Liga" were presented with a Grimme Award.

The 2008 TV-drama "Das Wunder von Berlin" saw Karoline Herfurth playing an East-German girl whose boyfriend is targeted by the secret police of the GDR. In "Im Winter ein Jahr" ("A Year Ago in Winter"), directed by Academy Award winner Caroline Link, she stars alongside Sepp Bierbichler und Corinna Harfouch as the traumatized sister of a boy who died in an accident. For this role she was awarded Preis der deutschen Filmkritik and Bayerischer Filmpreis. Also in 2008, she was cast in a supporting role for the internaional, star-studded production "Der Vorleser" / "The Reader", which is based on the eponymous novel by Bernhard Schlink.

In the same year she finished her studies at the Ernst Busch acting school in Berlin and began to study social sciences.

In 2009, she starred in a leading role in "Berlin 36": Based on a true story, Herfurth played a Jewish athlete who was forced by the Nazis to compete for the German team at the 1936 Olympic Games because threatened by a US boycott the Nazis had to admit several Jews to the team. In 2010, after a role as an anorexic in the succesful road movie "Vincent will Meer" ("Vincent Wants to Sea"), Caroline Herfurth played a leading role in Dennis Gansel's vampire drama "Wir sind die Nacht" ("We Are the Night"), in which she involuntarily joins a group of female vampires under the guidance of Nina Hoss.

After turns in the dramas "Das Blaue vom Himmel" ("Promising the Moon") and "Festung", Herfurth appeared in the satire "Zettl" and played an ambitious scientist in "Errors of the Human Body". Under the direction of Brian De Palma, she next appeared in the 2013 thriller "Passion" before again displaying her comic talents in the comedy "Fack Ju Göhte" ("Suck Me Shakespeer", 2013). In 2014, she played the mother of titular hero Rico in the children's film "Rico, Oskar und die Tieferschatten" ("The Pasta Detectives"). After a lead role in the comedy "Traumfrauen" (2015), she starred in the fantasy film "Die Gespensterjäger - Auf eisiger Spur", and reprised her previous roles for the sequels "Rico, Oskar und das Herzgebreche" and "Fack Ju Göhte 2".

After reprising her role as Rico's mother for the sequel "Rico, Oskar und der Diebstahlstein" ("Rico, Oskar and the Mysterious Stone"), Herfurth directed her first feature-length film with the 2016 romantic comedy "SMS für dich" ("Text for You"), in which she also played the female lead. She next starred in the Amazon series "You Are Wanted" before playing the titular character in the children's book adaptation "Die kleine Hexe" ("The Little Witch"). Playing an employee of the secret service, she belonged to the main ensemble of Marco Kreuzpaintner's thriller series "Beat" (2018).

In February 2019 Herfurth presented "Sweethearts", her second directorial work. The film, a mixture of crook and romantic comedy, received positive reviews, but could not follow the success of "SMS für dich". In autumn 2019 Herfurth was seen in the prominent ensemble of the comedy "Das perfekte Geheimnis", directed by Bora Dagtekin, with whom she had already made the first two "Fack Ju Göhte" films.