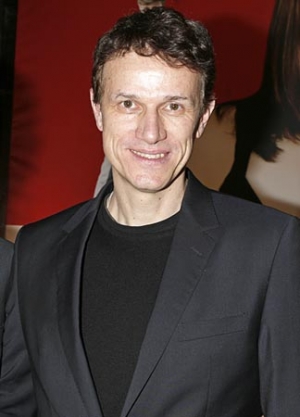 Gregor Schnitzler at the premiere of "Spieltrieb" on October 1, 2013 in Munich

Gregor Schnitzler, born in 1964 in Berlin, studied at the HdK arts academy in Berlin. He worked as a stills photographer and made, as of 1990, music clips and commercials, completing a total of 65 by 1997. From 1994 on he directed several episodes of TV-series. These were followed by the experimental feature "Finnlandia" (1999, co-directed by Eleni Ampelakiotou) as well as the comedies "Was tun, wenn's brennt?" (2002) and "Soloalbum" (2003).

After the TV film "Doppelter Einsatz" (2004) he completed his fourth feature film, "Die Wolke" ("The Cloud"), in 2006. The following year, he directed the TV drama "Ich bin eine Insel" about a former teacher, whose reclusive lifestyle is undermined by a neglected girl looking for help. After the thriller "Die Hitzewelle – Keiner kann entkommen" (TV, 2008) and two feature-length episodes of the series "Tatort", Schnitzler returned to the big screen: in the tragicomedy "Resturlaub" (2011), based on the eponymous novel by Tommy Jaud, a man tries to overcome his midlife crises by escaping to Buenos Aires.

Schnitzler received much praise from critics for his film adaptation of Juli Zeh's novel "Spieltrieb" ("Gaming Instinct", 2013), about a highly gifted 15-year-old outsider who, together with a new friend, involves a teacher in a perfidious game of power and dependence. His next film, the love story "Das Lächeln der Frauen" (2014, TV), was also based on a novel (by Nicolas Barreau) and is set in Paris. After this, he realised another TV production, "Mein Sohn Helen" ("Call Me Helen", 2015), about a male teenager who returns from a year abroad as a woman, taking his family and friends completely by surprise.

After filming two very different episodes of the popular German crime series "Tatort" ("Der treue Roy", 2016; "Level X", 2017) Schnitzler shot the adventure film "Kilimandscharo - Reise ins Leben" (TV), about a group of German tourists who try to reach the summit of the famous mountain. In the three-part family chronicle "Bella Germania" (2018), he tells the story of three generations of a (fictitious) German-Italian family from 1954 to 2019. The TV film "Lotte am Bauhaus" (2019), about a fictitious student at the Bauhaus University in the 1920s, based on the real-life artist Alma Buscher, won Best Television Film and Best Actress (Alicia von Rittberg) at the Seoul International Drama Awards 2019.

In autumn 2019, Schnitzler began shooting his first children's film: "Schule der magischen Tiere" (theatrical release: late 2020) is based on the book series of the same name.