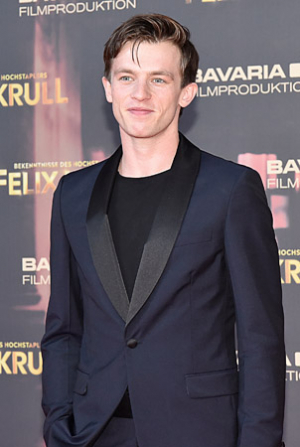 Jannis Niewöhner at the world premiere of "Bekenntnisse des Hochstaplers Felix Krull" in Munich on August 22, 2021

Jannis Niewöhner was born on the 30th of March 1992 in Krefeld. His acting career began early: in 2002, he had his first role in the crime series "Tatort". As Tim, one of the four main characters in "TKKG-Das Geheimnis um die rätselhafte Mind-Machine", Niewöhner gained a greater popularity among the German audience. Next to school, he appeared in several Television and Cinema productions, such as "Gangs", where he played a member of a Berlin gang next to Jimi Blue and Wilson Gonzales Ochsenknecht. His role as a surf - clique leader in "Sommer" ("Summer") got him a nomination for the Undine Award as best young supporting actor in 2008. He made his breakthrough in Aelrun Goette's "Ein Jahr nach morgen" where he portrayed the boyfriend of a girl that decides to run amok.

In Lars Kraume's whodunit adaptation "Dengler – Die letzte Flucht" (2014, TV) he played the son of the eponymous detective – and continued to do so in the film's sequels. Two bit parts in feature films followed: He played in "Für immer" (2014), a big city Romeo-and-Juliet story and as Heike Makatsch's flirt partner in the romantic comedy "Alles ist Liebe" (2014). In the "Bella Block" episode "Die schönste Nacht des Lebens" (2015, TV) he subsequently featured as a Navy cadet entangled in a case of death.

He played another lead in a big-screen production in Katja von Garnier's teen film "Ostwind 2" ("Windstorm 2", 2015) as the young protagonist's romantic companion. In 2015, the international co-production "The Girl King", a biopic on Queen Kristina of Sweden directed by Mika Kaurismäki, premiered at the Montréal WFF with Niewöhner personifying the Swedish military commander Jakob de la Gardie.

In December 2015, the teen drama "Vier Könige" (4 Kings) opened in German movie theaters. The film stars Niewöhner as one of four adolescents who are forced to spend Christmas in a psychiatric ward for juveniles. This role garnered him a nomination for the Deutsche Schauspielerpreis.

Critics also praised Niewöhner’s performance in "Jonathan", in which he plays a young farmer who takes care of his cancer-stricken father and eventually learns about the latter’s hidden homosexuality. This film and his turn in "Jugend ohne Gott" (2016) won him Bavarian Film Award for Best Newcomer. After starring in the fantasy movie "Smaragdgrün" ("Emerald Green"), Niewöhner was one of the leads in the miniseries "Maximilian" (2016/17).

In 2017, Jannis Niewöhner maintained a busy schedule with supporting roles in "So auf Erden", "Ostwind - Aufbruch nach Ora" ("Windstorm - And The Wild Horses") and "High Society". Moreover, Detlev Buck cast him as the lead in the gangster movie "Asphaltgorillas". In 2018, he played the title role of the Grimme Prize-winning thriller series "Beat", as a drug-addicted Berlin techno club promoter who is recruited by the secret service as an undercover investigator.

At the Berlinale 2020, the drama "Kids Run" premiered in the Perspektive Deutsches Kino section, starring Niewöhner in the leading role as a desperate single father who decides to take part in an amateur boxing tournament to make some much needed money. In March 2020, the film adaptation of the Hermann Hesse classic "Narziss und Goldmund" ("Narcissus and Goldmund") with Niewöhner in the title role of monastery student Goldmund was released in cinemas.

After a pandemic-related break, filming of the Thomas Mann adaptation "Bekenntnisse des Hochstaplers Felix Krull," ("Confessions of Felix Krull") starring Niewöhner in the title role, took place from June 2020. At the 2020 Hamburg Film Festival, Moritz Bleibtreu's directorial debut "Cortex" premiered, a psychological thriller with Niewöhner in the key role of a petty criminal.

When theaters were allowed to reopen in the summer of 2021 after the Corona lockdown, two films starring Niewöhner opened within a few weeks: "Bekenntnisse des Hochstaplers Felix Krull" and "Je suis Karl," in which Niewöhner embodies a diabolical neo-Nazi. He received a nomination for the German Film Award for this role.