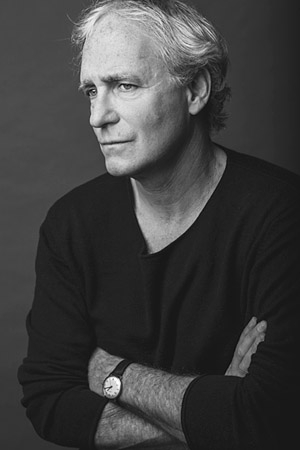 August Zirner was born January 7, 1959, in Urbana, Illinois as his parents had emigrated from Austria to the United States. In 1973, Zirner went to Vienna and attended actor's training at Max-Reinhardt-Seminar for three years. He then became a cast member of several well-known theatres such as Wiener Volksbühne, Schauspielhaus Zürich, or Munich's Kammerspiele. Initially, Zirner starred only occasionally in movies but from the end of the 1980s on, he took more and more TV and movie roles. With his "inconspicious yet striking features", Zirner starred in several significant supporting roles in films such as Volker Schlöndorff's "Homo Faber" ("Voyager"), or in TV series like "Ein Fall für zwei".

In 1994, Zirner made his breakthrough performance in "Das Versprechen" ("The Promise"), Margarethe von Trotta's ambivalent drama about the political history of East and West Germany. With parts in films as diverse as Rainer Kaufmann's "Stadtgespräch" ("Talk of the Town",1995), where Zirner plays his signature role, the textbook softie, or von Trotta's relationship melodrama "Winterkind" (1997), Zirner has made a name as one of the most versatile and intense actors of German cinema.

In the 2000s, Zirner appeared in popular family films as well as in ambitious arthouse productions. In the children's film "Das Sams" ("The Slurb", 2001) he played a nasty boss and in Sandra Nettelbeck's international success "Bella Martha" ("Mostly Martha", 2001) the main character’s psychotherapist. At the same time, he starred in István Szabós denazification drama "Taking Sides" (DE/FR/GB 2001) as an American captain in post-war Berlin and he portrayed a Jewish cabaret artist from Vienna, who tries to come to terms with his home countries' Nazi past by using dark humour in "Gebürtig" (AT/DE/PL 2002). In Heinrich Breloer's docudrama "Speer und er" ("Speer & Hitler: The Devil's Architect", 2005), Zirner played Gustave M. Gilbert, a US-American prison psychologist at the subsequent Nuremberg trials in 1945. Much lighter fare was his role in Sandra Nettelbeck's children's film "Sergeant Pepper" (DE/GB/IT 2004), in which he once more played a psychologist.

Of the many TV productions Zirner starred in, Züli Aladağ's drama "Wut" ("Rage", 2006) was probably the most controversial. Zirner played a family father in Berlin, whose son and family are being threatened by a teenager with Turkish roots. Though much-acclaimed by critics, the film was also discussed controversially for his explicit depiction of extreme violence. Together with co-lead actor Oktay Özdemir and director Aladağ, producer Wolf-Dietrich Brücker and screenwriter Max Eipp, Zirner received the Grimme-Preis, one of the most prestigious awards for German television.

On the big screen, he appeared in Stefan Ruzowitzky's Academy Award-winning drama "Die Fälscher" ("The Counterfeiters", AT/DE 2007) about a group of prisoners in the Sachsenhausen concentration camp, who are forced to produce large amounts of counterfeit money. In the same year, Zirner also starred in another children's film, playing the father of the young protagonist in "Herr Bello" (Director: Ben Verbong) and he portrayed a die-hard lawyer of a pharma company in the multi-award-winning TV two-parter "Contergan" ("Side Effects").

Among the many notable roles that Zinner played of the years (his filmography has more than 140 film and TV productions to it so far) are also those of a call center boss in André Erkau's ensemble film "Selbstgespräche" ("Come in and Burn Out", 2008), the father of the Jewish athlete Grete Bergmann in "Berlin 36" (2009) as well as the Archbishop of Vienna and Cardinal Franz König in the semi-documentary TV film "Der Kardinal" (AT 2011).

In Jo Baier's adaptation of Hermann Hesse's novel "Die Heimkehr" (DE/AT 2012, TV), August Zirner appeared in the lead role as an emigrant, who after his return to his hometown in Germany gets shunned by the community. In the much-acclaimed thriller "Der blinde Fleck" ("The Blind Spot", 2013) about the Munich Oktoberfest bombing in 1980, he starred as a whistle-blower and a year later, he got to show his comedic talent in the comedy film "Coming In" (2014) as the publisher of a gay magazine. Margarethe von Trotta cast him for her drama "Die abhandene Welt" ("The Misplaced World", 2015) in a supporting role as the main character's (played by Barbara Sukowa) husband. In the same year, he also starred as a peace activist in the highly-acclaimed TV thriller "Meister des Todes" about the German Arms industry.

At the Toronto film festival in autumn 2015, Florian Gallenberger's thriller "Colonia Dignidad – Es gibt kein Zurück" ("Colonia") celebrated its premiere. In the film, Zirner played a small role as the German Ambassador to Chile, who supports a sect leader. After that, Zirner made appearances in several TV productions again, including "Die Kinder der Villa Emma" ("The Children of Villa Emma", AT 2016), the highly-acclaimed relationship drama "Was ich von dir weiß" (2017) and in "Gladbeck" (2018), a much-noticed two-parter about the Gladbeck hostage crisis in 1988. In 2018, Zirner also starred in two feature films: In "Wackersdorf" about the civil resistance against highly controversial plans to build a nuclear reprocessing plant, he played the Bavarian State Minister of the Interior and in "Was uns nicht umbringt" ("What Doesn’t Kill Us"), he can be seen in the role of a psychotherapist who feels like he needs therapy himself.