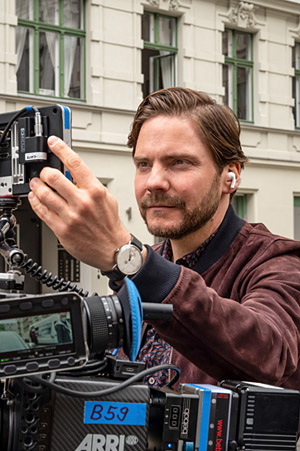 Daniel Brühl was born on June 16, 1978, in Barcelona to TV director Hanno Brühl and his Spanish wife. Brühl did not attend actor's training and started his TV career at the age of 15 in "Svens Geheimnis". At the age of 20, he made his movie debut in a supporting role in "Schlaraffenland" ("Paradise Mall"). After "Schlaraffenland", Brühl played leading roles in "Schule" ("No More School"), in "Das weiße Rauschen" ("The White Sound") and in "Elefantenherz" ("Elephant Heart"), which won him the German film prize.

"Nichts bereuen" ("No Regrets") and "Vaya con dios" both won him the Bavarian film prize. Brühl became highly popular to a wider audience with his role in Wolfgang Becker's immensely succesful comedy about the end of the GDR, "Good Bye, Lenin" (2003), which won him the German and the European film prize. After "Was nützt die Liebe in Gedanken" ("Love in Thoughts") the next (smaller) hit was "Die fetten Jahre sind vorbei" ("The Edukators", 2006) by Hans Weingartner, who already directed "Das weiße Rauschen". There Brühl portrayed an amateur revolutionary and accidental kidnapper. He also played in Michael Klier's "Farland".

From 2004 on, Brühl also starred in international movie productions such as the British film "Ladies in Lavender" and the British-French co-production "Merry Christmas". A great success in spain became his portrayal of the anarchist and bankrobber "Salvador" ("Puig Antich", 2006). Brühl won several awards for his brilliant performance.

He displayed an unusually unsympathetic side in Leander Haußmann's "Dinosaurier - Gegen uns seht ihr alt aus!", playing a ruthless bank manager who dispossesses an elderly woman of her home. At the end of 2010, he appeared in the stellar cast of Lars Kraume's apocalyptic drama "Die kommenden Tage" ("The Days to Come").

This was followed by a custom-made starring role in "Der ganz große Traum" ("Lessons of a Dream"), which was released in February 2011: Brühl plays the idealistic teacher Konrad Koch, who in the year 1874 introduced the then-unknown British sport football to his German pupils.

The same year he joined the international cast of the comedy "Und wenn wir alle zusammenziehen?". He went on to play a brilliant software engineer assigned to build a humanoid robot in the Spanish science-fiction film "Eva" (2011).

In 2013, he appeared alongside Philip Seymour Hoffman and Rachel Mc Adams in Anton Corbijn's adaptation of John Le Carré's "A Most Wanted Man" and played legendary Formula One driver Niki Lauda in Ron Howard's sports drama "Rush – Alles auf Sieg" (USA/GB/D). For this role, he received nominations in the U.S. for Best Supporting Actor at the Golden Globe Awards, the Critics' Choice Movie Awards and the Screen Actors Guild Awards; in England, he was nominated for the British Academy Film Award. He also reunited with director Wolfgang Becker for "Ich & Kaminski" (2015), in which he plays a cynical journalist who takes an old painter on a trip through Europe.

Brühl's next film premiered at the Toronto International Film Festival in September 2015: In the award-winning thriller "Colonia Dignidad - Es gibt kein Zurück" ("Colonia", DE/LU/FR), he played a student who was held in the notorious Colinia Dignidad sect in Chile in 1973. In the next few years, Brühl could also be seen in a number of international (co-)productions. Among others, as a restaurateur in the Michelin-starred kitchen drama "Burnt" (US 2015) with Bradley Cooper, as a police inspector in the Nazi resistance story "Alone in Berlin" (DE/GB/FR) with Emma Thompson and Brendan Gleeson, as the villain Zemo in "The First Avenger: Civil War" (US/DE 2016) and as zoologist Lutz Heck in the Holocaust drama "The Zookeeper's Wife" (US 2017) with Jessica Chastain.

From 2018 through 2020, he also starred in the US series "The Alienist" as a psychologist investigating a series of murders of male prostitutes in 1896 New York. For this role he received his second nomination for the Golden Globes.

In competition at the 2021 Berlinale, Brühl presented his directorial debut: the tragicomedy "Nebenan" ("Next Door") tells the story of an actor (Brühl) who is on the verge of an international breakthrough thanks to a role in a superhero film. Just before his departure, however, he gets into a bitter discussion in a corner bar in Berlin's Prenzlauer Berg district with a regular guest (Peter Kurth) who is frustrated with life. "Nebenan" opened in German theaters in summer 2021.

Also in 2021, Daniel Brühl played the villain Baron Zemo in the US American superhero series "The Falcon and the Winter Soldier".