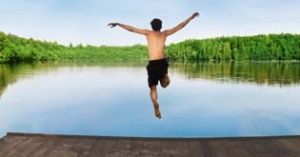 Tobi and Achim have been best friends for years. As cox and oarsman, they have helped their local team win several rowing cups in the past and are now anxiously awaiting the big summer regatta on a lake in the countryside. A local girls′ team is also competing in the regatta and Achim is looking forward to spending some time with his girlfriend Sandra at the lakeside summer camp. Tobi starts having second thoughts about this relationship when he realizes that his feelings for Achim run deeper than he′s willing to admit to himself. He feels confused, unsure of himself and increasingly left out. When Sandra′s girlfriend Anke shows interest in him, it only adds to his anxiety.

Then it turns out that a much-anticipated girls′ team from Berlin has been replaced by a team of athletic, cliché-bursting young gay men. Tobi and his teammates are suddenly forced to grapple with their prejudices, their fears, and, perhaps, their hidden longings. As the tension grows, Tobi, Achim and the others head towards a confrontation as fierce and, ultimately, liberating as the summer storm gathering over the lake…

In his second feature film, which won the Audience Award at the Munich Filmfest 2004, Marco Kreuzpaintner spotlights the emotional confusion of a group of young people at the threshold to adulthood.