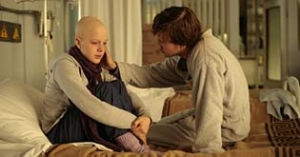 Hannah is a perfectly ordinary 16-year-old schoolgirl in the town of Schlitz, northeast of Frankfurt, where hardly anything ever happens. Her single mother has to attend a congress in another city, leaving Hannah in charge of her pestering little brother Uli. Nevertheless, it’s a very special day for her: she gets her first kiss from Elmar, her new boyfriend. Just at this moment the sirens begin to wail. A core melt accident has occurred in a nearby nuclear reactor. A huge radioactive cloud is heading straight toward Schlitz. In its wake some 38,000 people are immediately killed by the fall-out, thousands of others contaminated. Chaos breaks out in the town. No plans have been made for the disaster; anarchy reigns. Elmar has arranged to pick up Hannah and Uli in order to escape by train, but they are not there when he arrives.

He also doesn’t find them on the train he manages to catch. Hannah hasn’t made it. In her panic she has tried to reach the station by bicycle, but Uli is run over by a car in the chaotic traffic and Hannah is caught by the radioactive cloud. She wakes up in the hospital, not expecting to live very long. But then Elmar returns to her. He, too, is contaminated. Now they have only one ray of hope: their love.

Gregor Schnitzler’s film is based on the highly praised youth novel by Gudrun Pausewang, which won, among other awards, the 1988 German youth literature prize. For Schnitzler the political message is of central importance: "When I make a film about a nuclear catastrophe in Germany, I have a reason to do so. I want to say: Hey people, look at what you’re letting happen. The nuclear plants are right around the corner from you and you don’t even know how dangerous they really are."