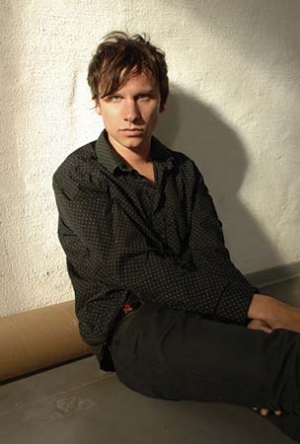 Robert Stadlober was born August 3, 1982, in Friesach/Kärnten and moved to Berlin in 1989. He dropped out of Waldorfschule at the age of 16 and dubbed several leading roles in films such as "Butcher Boy" and "Der Schatzplanet" ("Treasure Planet"). In 1995, Stadlober made his TV debut in "Ausweglos" and played his first minor movie part in "Kai Rabe gegen die Vatikankiller" ("Kai Rabe vs. the Vatican Killers", 1998).

Stadlober made his breaktrough as Wuschel in "Sonnenallee" ("Sun Alley",1998). In 2000, he played his first leading role as the tramp Engel in "Engel & Joe" (2001). He was also seen as Neue Deutsche Welle punk in "Verschwende deine Jugend" ("Play It Loud!", 2003) and as a teenager who comes out of the closet in "Sommersturm" ("Summer Storm", 2004). He also played his role model Klaus Kinski in the short film "Klaustrophobie" (2002) and got great reviews for his title role in the TV-movie "Peer Gynt" (2006). In 2008 Stadlober starred in the films "Berlin am Meer" and the long awaited adaptation of the novel "Krabat" by Ottfried Preußler.

The image of the sensitve and youthful hero was maintained in Stadlober's following roles: In "Zarte Parasiten" ("Tender Parasites", 2009), he is a homeless man finding shelter at wealthy manager's house; in the comedy "Unter Strom" ("Live Wire - A Day in the Life of an Innocent Kidnapper", 2009), he plays an inept small-time crook with romantic problems. "Der Mann, der über Autos sprang" ("The Man Who Jumped Cars", 2010) stars Stadlober as a patient escaping from a psychiatric ward and going on an eventful trip through Germany.

In "Kottan ermittelt: Rien ne va plus" (2010) he played ambitious, yet clumsy detective Schrammel – a rather bold move: This cult persona known to the public from a TV series, on which the movie was based, had been the late Curth Anatol Tichy's signature role.

"Adams Ende" (2011) was Stadlober's first film project as both lead actor and producer. Austrian filmmaker Richard Wilhelmer's debut feature tells the story of a young man whose admiration for his easy-going best friend turns into aggression.

In the summer of 2012, he featured in "Bis zum Horizont, dann links!" ("Fly Away"), a low-paced comedy directed by Bernd Böhlich. He played the role of a pilot whose plane is captured by a group of lusty retirees led by Otto Sander.

Stadlober was also involved in a large number of cinema and television productions in the following years. Among others, he played a German lieutenant in Volker Schlöndorff's "Diplomatie" ("Diplomacy", 2014), a guard in "Kafkas Der Bau" (2014) and the real-life Bayern München football manager Uli Hoeneß in the documentary drama "Uli Hoeneß - Der Patriarch" (2015, TV). He appeared in the supporting role of Jakob in the film adaptation of Ibsen's "Solness" (2015) and makes a bizarre cameo appearance in "Freddy/Eddy" as an esoteric new friend of Freddy's ex-girlfriend. Stadlober also appeared in two TV series, as a programme director in the sitcom "Das Institut" (2017-2019) and as a cook in the remake of "Das Boot" (2018). Director Joachim Lang cast him as composer Kurt Weill for "Mackie Messer - Brechts Dreigroschenfilm" ("Mack the Knife – Brecht's Threepenny Film", 2018) and under the direction of Bernd Böhlich he played the new partner of the main character, a GDR citizen who has to keep her past in a Siberian Gulag a secret, in the drama "Und der Zukunft zugewandt" ("Sealed Lips", 2019).

Besides his work as an actor Stadlober is the singer of rock band "Gary" who published their debut album "The Lonely Cnorve Machine" in 2002, followed by "One Last Hurrah For the Lost Beards of Pompeji" in 2010. He also runs the independent record label Siluh Records.