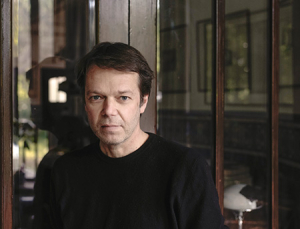 Hans-Christian Schmid was born 1965 in the Bavarian city of Altötting, a famous place of pilgrimage. Nevertheless, Schmid was not brought up in a ultra-catholic fashion as some of his films might suggest. Instead, he grew up in a liberal home, attended a high school that was regarded politically left, went to demonstrations for peace instead of Sunday service, and was an active member of the Green party.

From 1985 to 1992, Schmid studied documentary film making at Munich's Hochschule für Fernsehen und Film (HFF), where he filmed his debut movie "Sekt oder Selters" (1989) about people addicted to slot machines as well as two more short films. In his graduation film "Die Mechanik des Wunders" (1992), he dealt with the organized religiousness of his home town for the first time. After graduating from HFF, Schmid got a scholarship from Drehbuchwerkstatt München to study screenplay writing at University of Southern California in Los Angeles.

In 1994, Schmid finished his first feature, the TV production "Himmel und Hölle" ("Heaven and Hell"). In showing the daughter of a single mother in the country who gets caught in the clutches of a Christian sect, he thematized the abysms of religious fanaticism. The generations comedy "Nach fünf im Urwald" ("It's A Jungle Out There", 1995) was also supposed to air on TV, but due to the film's success at Hofer Filmtage, the film entered the movie screen where it became a success with movie goers and critics alike. In the film, Franka Potente, who lived with Schmid until 1998, made her debut in a leading role. Since then, Schmid is considered to be great promoter of young acting talent. He also discovered August Diehl and Tom Schilling.

With his next film, "23" (1999), Schmid pushed the envelope even further: The film tells the true story of a young hacker who loses himself in conspiracy theories and finally dies under mysterious circumstances. "23" proved Schmid's aplomb to transform even such a topic into an authentic, and accurate film that dispenses with speculative sensationalism. Schmid won the Hypo-Regie-Förderpreis at the 1998 Munich film festival, while leading actor August Diehl received several "Best actor" awards. Schmid wrote the screenplay for "23" together with Michael Gutmann and later worked as writer and cinematographer for Gutmann's films "Nur für eine Nacht" (1997) und "Familienreise" (2004). With "Crazy" (2000), he adapted the autobiographical novel of the young writer Benjamin Lebert that depicts the life of a hemiplegic boy at a boarding school. With this film, Schmid continued his sensitive observations of rites of passage. His melancholic episode film "Lichter" ("Distant Lights", 2003), that tells the story of several people living at the German-Polish border, officially ran in the competition of the 2003 Berlinale.

"Requiem" (2006), a film that again takes up the topic of excessive religiousness, also ran in the Berlinale competition. Like "23", the film is based on an authentic case of a person that slowly loses its sense of reality: a young woman from a Swabian village that was forced to go through an exorcism. Once more, Schmid's film attracted attention for a multiple award-winning acting performance by Sandra Hüller, a rather unglamorous theatre actress with little movie experience.

Ever since "23", Hans-Christian Schmid ranked among the most promising young directors of German cinema and meanwhile counts as one of its masters.

At the 2009 Berlinale, Schmid presents two new projects: the documentary film "Die wundersame Welt der Waschkraft" ("The Wondrous World of Laundry"), and the political drama "Sturm" ("Storm") that moves Schmid topically and also with its cast to international territory. The film tells the story of a female attorney's fight for justice and fairness in the face of war crimes in Bosnia.

Schmid's follow-up feature, again, was selected for the Berlin IFF competition. The family drama "Was bleibt" ("Home for the Weekend") shows two grown-up sons visiting their parents in the countryside. Yet, family life is not as harmonious as it seems to be in the first place.

For television, Schmid realized the four-part miniseries "Das Verschwinden" (2017): Set in a small town near the Czech border, the milieu and social study is about a single mother (Julia Jentsch) who investigates the whereabouts of her 20-year-old daughter, who has disappeared without a trace. At the 2018 German Television Awards, Schmid and his co-writer Bernd Lange were won the award for Best Screenplay; at the German Television Crime Award, Schmid received a special prize for his 'overall achievement in production,' and the German Academy for Television awarded him Best Director.

As a producer, Schmid was involved in the social drama "Atlas" (2017) and the "Polizeiruf 110" episode "Der Fall Sikorska" (2018, with Bernd Lange). In spring 2021, filming took place on his next next feature film: "Wir sind dann wohl die Angehörigen" ("We Are Next of Kin"), a film adaptation of Johann Scheerer's autobiographical novel about the kidnapping of his father Jan Philipp Reemtsma in 1996, celebrated its world premiere at the 2022 Hamburg Film Festival and was released in German theaters shortly thereafter.