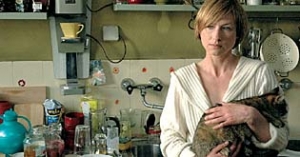 Rose is in her early forties and the single mother of three – it would seem – grown-up sons: Bernd, 23, earns money for the family working at a copy shop during the day and in a pub at night; Axi, 21, is in training at a bank; and Stan, the youngest, who will soon turn 18, is doing his best not to finish high school and prefers to smoke dope and start a career as a DJ.

As a squatter in the early ‘80s Rose had led a fairly wild life until it suddenly came to an end when she broke up with Jürgen, the father of the boys, more than ten years ago. They have had no further contact since then. Rose moved into her grandfather’s house with the three boys and now earns a living writing cheap novels. And then there’s her new boyfriend Gerhard. She hasn’t dared to tell the boys about him and is not at all sure he’s the right guy for her.

The symbiotic relationship with her sons that exists despite all odds is endangered when Jürgen shows up at Axi’s bank looking for a loan. He doesn’t recognize Axi, and Axi doesn’t let on that he knows who Jürgen is. But at home Axi pleads with his mother to invite their father to visit them. Rose has no desire to see her ex and to have him upset her life and that of her sons. But when Jürgen shows up at their place without an invitation, that’s exactly what happens…