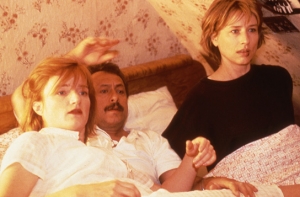 To the Horizon and Beyond

Faraway from the hectic metropolis is a little, abandoned village which was set to make way for the brown coal mine. But open-cast mining no longer makes financial sense. A giant excavated desert is what is left behind. Henning Stahnke is at home in this bizarre landscape. The love of his life Katja has just been sentenced in Berlin to three years in prison. In absolute desperation, Henning kidnaps the responsible woman judge Beate Nelken to secure Katja′s release. He transports the hostage in an old car to his native village where his old crone of a mother is the only one still living there.

Beate learns how to summon up some understanding there for his fate: in fact, her own fate is connected inseparably with that of the separated lovers. Without Henning knowing it, Katja manages to escape with the help of her eccentric cell-mate "Countess" Thilde. She hitchhikes her way to Henning′s village, but the police are close on the heels of the kidnapper and the escaped convict. A race against time begins...