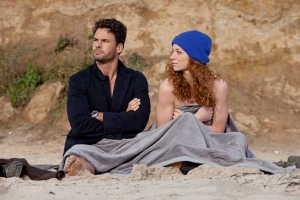 Successful advertising executive Tom Moreno (Stephan Luca) is good with women. He’s an artist in winning them, and getting rid of them after the third time. But then Elisa (Marleen Lohse), the agency’s new art director, enters the scheme of things and Tom’s familiar tricks fail to work, throwing him into confusion and with nobody to turn to for help.

This is because Tom’s friends have problems of their own: Vince (Oliver Fleischer) finds his wife in Tom’s bed; Luke learns from, of all people, Tom’s mother (Corinna Harfouch) that ‘no sex is no option’; Paule (Anna Thalbach) falls in love with a man in a suit (Michael Lott) and mutates from buddy to femme fatale. And to top it all off, his boss Rolf (Armin Rohde) tells him the agency is as good as bust. It’s no wonder Tom forgets to be careful and neglects his relationship-avoidance rules.