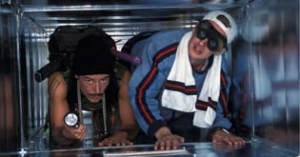 The Bunnyguards vs. The Forces of Evil
Many thousands of years ago, the evil Kartan and the benevolent Tana fight against each other in a struggle to gain control of a magical dagger. Only if he can kill Tana, will Kartan be able to wake the evil spirits of the knife and become the master of unlimited powers on earth. In their bitter life-or-death struggle, the beautiful Tana is able to escape, but her spirit is trapped within the dagger, which then mysteriously disappears. Thousands of years later - namely today - Kartan finds the dagger, but as fate would have it, the magical weapon happens to be in the hands of the chaotic, loud-mouth friends Erkan & Stefan.


Tana escapes from the confines of the dagger and asks the two friends for help. While Erkan is excited about the idea of spending a hot night with Tana after their mission, Stefan thinks that she is actually a virtual character from their favorite video game and that they have finally managed to beam themselves into the game.

Despite the fact that Kartan has sent two mad killers after them, Erkan & Stefan are able to ward them off. But then Kartan casts a spell on them, turning them into the super cool dudes they have always wanted to be. Seduced by the powers of evil, they soon forget their promise to help Tana. When they finally come to their senses and realize what has happened, it is almost too late to save Tana from Kartan’s evil plan...