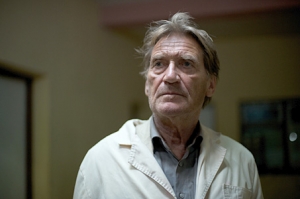 Matthias Habich was born January 12, 1940, in Gdansk and grew up in Hamburg. From 1961 to 1964, he studied at Hamburg's Hochschule für Musik und Drama and attended acting workshops at Lee Strasberg and Uta Hagen in New York. After finishing actor's training, Habich performed at numerous theatres, for instance in Zürich, Munich, and Berlin, and starred in several productions of classic plays. He also became a famous TV actor with his title roles in the multi-part TV movies "Die merkwürdige Lebensgeschichte des Friedrich Freiherrn von der Trenck" (1973) and "Des Christoffel von Grimmelhausen abenteuerlicher Simplicissimus" (1975).

In 1976, Habich made his movie debut as stone-cold Prussian officer in Volker Schlöndorff's "Der Fangschuß" ("Coup de grâce"). He made a name as an impressive character actor with roles in the family drama "Der Mädchenkrieg" ("Maiden's War", 1977) or in the Eichendorff adaptation "Taugenichts" ("Good-for-Nothing", 1978). But despite his movie success, Habich mainly focused on his theatre career and was only sporadically seen on the movie screen during the following years, for instance in Robert van Ackeren's controversial drama "Die Reinheit des Herzens" ("Purity of Heart").

Towards the end of the 1980s, Habich more and more turned to film and TV productions and starred in ambitious productions such as Rainer Simon's "Der Fall Ö.", Caroline Link's "Jenseits der Stille" ("Beyond Silence", 1996), Oliver Hirschbiegel's TV crime film "Das Urteil" (1997; winner of a Grimme award), Margarethe von Trotta's "Jahrestage" (2000; winner of the German TV award), or the TV series "Klemperer – ein Leben in Deutschland" (1998) – thus becoming one of the most prominent German character actors.

In 2001, Habich received rave reviews as well as a German film award for his performance in Caroline Link's multiple award-winning drama "Nirgendwo in Afrika" ("Nowhere in Africa"). While working mostly for TV productions, Habich was again seen on the movie screen in the adaptation of Günter Grass' story "Unkenrufe" ("Call of the Toad") in 2005 and – in a key supporting role – in "Der Vorleser" ("The Reader"), an international production starring Kate Winslet and Ralph Fiennes in 2009.

In 2009 he also played one of the leads in Lancelot von Naso's award-winning drama "Waffenstillstand" ("Ceasefire") and a father grieving over the violent death of his daughter in the made-for-TV film "Ein halbes Leben". For his performance, Habich shared a Grimme Award with director Nikolaus Leytner and his co-stars Josef Hader and Franziska Walser.

After parts in the mountaineer drama "Nanga Parbat" (2010) and Andreas Kleinert's "Barriere" ("Boundaries", 2010), Habich's career again focused on television: He co-starred in the thriller "Morgen musst Du sterben" (2010), played the youth love of a nun in "Eine halbe Ewigkeit" (2011), was a patriarch with a shadowy past in Carlo Rola's "Das Kindermädchen" (2012),and portrayed a man who was abused during his childhood in a Catholic institution in "Und alle haben geschwiegen" (2012).

On the big screen, he portrayed an Austrian emigrant who fled the Nazis and later returns to reclaim his home in Vienna in "Where I Belong" (AT/GB 2012), and a priest in Vivian Naefe's "Der Geschmack von Apfelkernen" ("The Taste of Apple Seeds", 2013). Margarethe von Trotta cast him as the male lead for "Die abhandene Welt" ("The Misplaced World"), in which Matthias Habich plays a widower who discovers his allegedly dead wife on a newspaper photo.

Habich also had major roles in the TV film "Das Gewinnerlos" (2015), as a pensioner who saves himself from deportation to an old people's home with a white lie, and in "Ein großer Aufbruch" (2015), as a family patriarch who wants to put an end to his fulfilled life. There was also a lot of critical praise for the eccentric comedy "Matthiesens Töchter" (2016), about a indebted loser whom his three equally messed up daughters want to help out.

On the big screen Habich appeared in the thriller "Berlin Syndrome" (AU) in a supporting role as the father of a psychopathic kidnapper; Til Schweiger cast him as a palaeontologist in "Conni & Co. 2 - Das Geheimnis des T-Rex" (2017). The TV filom "Das Leben vor mir" (2018) shows him as a father who 25 years after his coming out has to take in his alienated daughter.