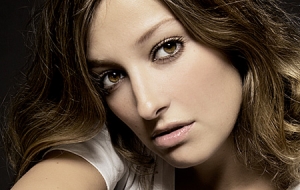 Alexandra Maria Lara, born as Alexandra Maria Platareanu on November 12, 1978, in Bucharest, Romania, as the daughter of actor Valentin Platareanu. In 1983, her family left Romania for political reasons and went to West Berlin via Freiburg.

In Berlin, her father set up the officially recognized "Schauspielschule Charlottenburg". Alexandra Maria Lara already made her acting debut at the age of eleven in a small role in the TV production "With Love, Rita" (1989). After several smaller roles she landed the title role of the ten-part pre-prime-time TV series "Mensch, Pia!" in 1996 – already under her stage name of "Lara". In the following year, she started to attend actor's training at her father"s drama school and graduated in 2000. During this time, she already appeared in several TV productions and on the movie screen in the film "Südsee, eigene Insel" ("Our Island in the South Pacific", 1999).

After supporting roles in films like Roland Suso Richter's GDR escape thriller "Der Tunnel" ("The Tunnel", TV, 2001), or Peter Thorwarth's crook comedy "Was nicht passt wird passend gemacht" ("If It Don"t Fit, Use a Bigger Hammer", 2002), Lara made her breakthrough in 2002 in Doris Dörrie's ensemble film "Nackt" ("Naked"). In the same year, she also starred in the elaborate, international TV co-productions "Doctor Zhivago" and "Napoleon" Lara then further established her image as naïve seeming, girlish woman who recovers her self-esteem in the decisive moment though. Director Oliver Hirschbiegel also used Lara's image when he gave her the role of Hitler's secretary Traudl Junge in his film "Der Untergang" ("Downfall") – the extremely controversial film became a box office hit and finally made Lara internationally famous.

She then played leading roles in films as diverse as Helmut Dietl's romance "Vom Suchen und Finden der Liebe" ("About the Looking for and the Finding of Love", 2005), Doris Dörrie's satirical film "Der Fischer und seine Frau" ("The Fisherman and His Wife", 2005), Didi Danquart's film "Offset" (2006), and Anno Saul's politically incorrect comedy "Wo ist Fred" ("Where Is Fred?") alongside Til Schweiger.

In 2007 and 2008, Lara starred in several international productions for the movie screen and worked with a under well-known directors: After the British comedy "I Really Hate My Job", directed by the Shakespeare specialist Oliver Parker, and Anton Corbijn's highly praised "Control", the biopic about the musician Ian Curtis, Lara appeared in Francis Ford Coppola's "Youth Without Youth" (Coppola gave the role to Lara after he had seen her in "Der Untergang"), in James Ivory's "The City of Your Final Destination" alongside Anthony Hopkins, and in Spike Lee's World War II drama "Miracle at St. Ana".

In the summer of 2008 Lara took part in a film with a predominant German Theme: Uli Edel’s multiple prizewinning, critically controversial "Der Baader Meinhof Komplex" ("The Baader Meinhof Complex") in which she played the terrorist Petra Schelm. In the spring of 2009, Lara played a part in Esther Gronenborn’s "Hinter Kaifeck"; an atmospheric mystery thriller with a less costly production. This was followed by another series of international productions, including roles in the Arabic production "City of Life" (2009) and alongside Gérard Depardieu in the German-French drama "Je n'ai rien oublié" ("Small World", 2010).

By the end of 2011 Lara was seen in the female lead role in Detlev Buck's showbiz comedy "RubbeldieKatz" ("Woman in Love"), about an unemployed actor who suddenly makes it big dressed as a woman; followed by the bizarre road movie "Nachtlärm" by Christoph Schaub.

After that Lara appeared in front of the camera for a number of international productions: In the Polish-Portuguese drama "Imagine" (2012), she plays a blind woman who is encouraged by an unconventional teacher for the blind to become less introverted; In the thriller "Move On" (DK/DE 2012) she stars as the mysterious client of a secret agent (Mads Mikkelsen); in the Formula 1 drama "Rush - Alles für den Sieg" ("Rush", US/UK/DE 2013) she embodied Marlene Lauda, the wife of the legendary Formula 1 pilot Niki Lauda.

After a minor supporting role in the Second World War drama "Suite Française" (UK/FR/CN 2015), she appeared in a central role as the ex-girlfriend of a terminally ill man in the comedic road movie "Der geilste Tag" ("The Most Beautiful Day", 2016). In December 2016, two films with Lara were theatrically released: The children's film "Robbi, Tobbi und das Fliewatüüt" ("Robby & Toby's Fantastic Voyager") in which she plays a dubious secret agent and Wolfgang Petersen's crook comedy "Vier gegen die Bank". She also played a supporting role in the American science fiction thriller "Geostorm" (2016), which was released in German cinemas in early 2017.

In 2017/2018 Alexandra Maria Lara was the wife of the main character Lukas Franke (Matthias Schweighöfer), a hotel manager who has been hacked, in the German Amazon production "You are Wanted". In Markus Goller's comedy "25 km/h" (2018) she is a married woman who starts a spontaneous affair with one of the main characters. Also in 2018, she starred in Bernd Böhlich's drama "Und der Zukunft zugewandt" ("Sealed Lips") in which she comes to the GDR from the Soviet Union in the 1950s and has to keep her past a secret until the fall of the Berlin Wall. The film was released in cinemas in September 2019. Before that, she played the granddaughter of a murdered industrial magnate in the court thriller "Der Fall Collini" ("The Collini Case") and portrayed the mother of clumsy Alfons in the family film "Alfons Zitterbacke - Das Chaos ist zurück" ("Alfons Zitterbacke – The Return of the Chaos", both 2019).