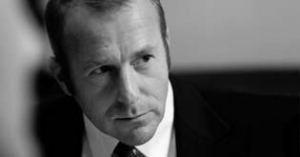 Heino Ferch was born on August 18th, 1963 in Bremerhaven, the son of a naval officer. An acrobatic role in the musical "Can-Can" set the 15 year-old German National League gymnast off, giving him ample stage-time. Following his Abitur in 1984, he studied acting at the "Mozarteum" Hochschule für Musik und darstellende Kunst (Academy for Music and Performing Arts) in Salzburg; his training was comprised of tap-dancing, ballet and vocal performance.

Between 1987 and 1990 Ferch was an ensemble member of the Freie Volksbühne (Free Peoples' Stage); from 1990-1994 he worked with Alfred Kircher and Alexander Lang at the Schillertheater in Berlin, was a guest performer at the Salzburg Festival, at the Milan Scala, and the Wiener Burgtheater (Vienna). As it was increasingly difficult to motivate himself to continually play the same role on stage, he switched to film and television.

Ferch made his cinematic debut in 1987 as a radio operator in Peter Schamonis' "Schloss Königswald" ("Königswald Palace"). He distinguished himself in a great variety of roles – for example, as Klaus, an S-Bahn conductor in Heiko Schier's milieu study "Wedding", or as the slimy luxury dog food salesman in the Didi-Hallervorden rag "Alles Lüge" ("Everything Lies"). Television brought great purpose to his career, having worked with such directors as Uwe Janson, Nico Hoffmann and Roland Suso Richter. Volker Schlöndorff helped his silver-screen career take off with his film version of Tourniers "Der Unhold" ("The Ogre"). The role of the Nazi-officer Obersturmbannführer Raufeisen put Ferch forward for the part of the Gestapo chief Klaus Barbie in Claude Berri's Résistance drama "Lucie Aubrac".

Though Ferch only plays a supporting-role in the ensemble of the "Comedian Harmonists" (directed by Joseph Vilsmaier), he received the Bavarian Film Award for his fully-formed performance as the singer and devout Jew Roman Cykowski. He received the Bavarian Television Award for his stout representation of the one-time DDR swimming star Harry Melchior, who digs his way to freedom in the made-for-TV movie "Der Tunnel" ("The Tunnel").

As an actor, he builds an increasingly sensible roster, taking on such roles as Simon in "Die grüne Wüste" ("Green Desert"), but also ventures in other extremes, such as the Rambo-esque ex-foreign legionnaire "Straight Shooter", the neurotic Peeping Tom in "Nachts im Park" ("At Night in the Park"), and a serial killer in the TV thriller "Der Schutzengel" ("The Guardian Angel"). Ferch has also established himself internationally, playing the Celtic chieftain Vercingetorix in the TV historical drama "Julius Cäsar" as convincingly as the heavily-starched Marquis de Caulaincourt in "Napoleon".

As versatile as Ferch is, he credibly embodies what he termed "authentic manliness" (Der Spiegel, Nr. 12 1998). Physical presence and minimal facial expression are the hallmarks of his performance before the camera.

In Christian Duguay's film "Extreme Ops" (2002), Ferch tried himself in a pure action movie. However, the film did not leave a considerable mark with critics or movie goers alike. Ferch acted more convincingly in films like the TV movie drama "Das Wunder von Lengede" ("A Light in Dark Places", 2003) and in the role of Albert Speer in "Der Untergang" ("Downfall", 2004). After a supporting role as Hermes, messenger of the Gods, in Helmut Dietl's romantic comedy fantasy "Vom Suchen und Finden der Liebe" ("About the Looking for and the Finding of Love", 2005), Ferch first and foremost starred in ambitious TV movies like Markus Imboden's film "Auf ewig und einen Tag" (2006), or Roland Suso Richter's "Das Wunder von Berlin" (2008).

In 2008, Ferch was seen in a smaller role in Uli Edel's film "Der Baader Meinhof Komplex" ("The Baader Meinhof Complex"). One year later, he played a leading role as monk Volmar in Margarethe von Trotta's highly-praised biopic "Vision – Aus dem Leben der Hildegard von Bingen" ("Vision"). In 2010, Heino Ferch was seen on the movie screen in four films: He played the crook Klaus Schmitt in the crime film "Jerry Cotton" and the father of a guy suffering from Tourette syndrome in "Vincent will Meer" ("Vincent Wants to Sea"), starred in the role of Max Manchon in the biopic "Max Schmeling", directed by trash maestro Uwe Boll, and played Herr Sullivan in the children's book adaptation "Hanni & Nanni".

In 2011, he starred in four high-profile TV productions: "Spuren des Bösen", "Verschollen am Kap", "Vater Mutter Mörder" and "Rottmann schlägt zurück". He then returned to the big screen with "Ruhm" ("Glory: A Tale of Mistaken Identities"), an adaptation of Daniel Kehlmann's eponymous novel. In the film, Ferch plays the role of a vain movie star who suddenly seems to be forgotten by the world.

Ferch remained highly productive: After returning for the sequel "Hanni & Nanni 2" (2012), he played an East German secret service agent in the TV movie "Deckname Luna" (2012) and received a nomination for the Bavarian Television Award for his performance in "Rachengel" (2012).

He was then cast by Stefan Krohmer for "Verratene Freunde" (2013, TV) and played British writer Houston Stewart Chamberlain in the period drama "Der Wagner-Clan. Eine Familiengeschichte" (2013, TV). On the big screen, Ferch appeared in a supporting role in the Indian thriller "Tigers" (2014) and embodied a Nazi officer in the international co-production "Suite Française" (2014).

The year 2015 saw him playing a great variety of characters in TV productions: He portrayed police detectives in the TV thrillers "Tod eines Mädchens" and "Spuren des Bösen – Liebe", the single father of a transsexual boy in "Mein Sohn Helen", an agent of an anti-terrorist unit in "Unterm Radar", a seemingly happy man burdened by a dark secret in "Der Verlust", and a fatherly instructor in the fairy tale adaptation "Hans im Glück". Moreover, Ferch appeared as the mysterious Dr. Thurisaz in the fantasy epic "Mara und der Feuerbringer" ("Mara and The Firebringer", 2015).

In 2016, he starred in the TV miniseries "Ku'damm 56" and the TV comedy "Keine Ehe ohne Pause", before playing legendary director Fritz Lang in the theatrical release "Fritz Lang".