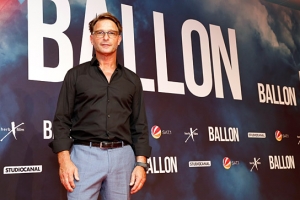 Thomas Kretschmann at the worldpremiere of "Ballon" in Munich on September 12, 2018

Thomas Kretschmann was born in Dessau, GDR, on 8th of September 1962. In 1980, he decided to become an actor and enrolled at the State Drama School Ernst Busch in Berlin. Two years later, he escaped to West Berlin, where he first studied at the acting school Der Kreis and subsequently had an engagement at the Schiller Theater. He also appeared on stage at the Schauspielhaus in Vienna and the Kammerspiele in Hamburg.

It was in Wieland Speck's gay east-west love story "Westler" that Kretschmann gave his debut on the screen in 1985. For his second screen role in the TV drama "Der Mitwisser" (1989), he won the New Talent Award at the Max-Ophüls-Preis film festival. After impressive lead roles in Klaus Lemke's "Die Ratte" (1993) and Joseph Vilsmaier's elaborate war drama "Stalingrad" (1993), he pursued an international career. He starred in Patrice Chéreau's multi-award-winning "La Reine Margot" ("Queen Margot", FR/IT/DE 1994) and played the lead characters in Dario Argento's "La Sindrome di Stendhal" ("The Stendhal Syndrome", IT 1996) as well as in knight film "Prince Valiant" ("Prinz Eisenherz", GB/DE/IE 1997). In parallel, he appeared in a number of German TV productions.

In addition to that, Kretschmann starred in a number of bigger German TV productions, such as in the lead role of a new adaption of the adventure story "Der Seewolf" ("The Sea Wolf", 2008) and as a courageous pilot in Roland Suso Richter's much-acclaimed drama "Mogadischu" ("Mogadishu Welcome: The Hijacking of Flight 181", 2008). He also appeared in the biopic "Romy" (2009) about Romy Schneider as well as in Richter's somber drama "Die Grenze" ("The Frontier", 2010).

In 2011, Thomas Kretschmann could be seen on the big screen in two German feature films: in the adaptation of the bestseller "Jungle Child" he played the father of a family that immigrates to Papua New Guinea and in Matthias Schweighöfer's "What a Man" he portrayed a man that steals the lead character's girlfriend. After that, he again starred in a number of international productions, playing the title role in "Dracula 3D" (IT/FR/ES 2012), an officer in the war film "Stalingrad" (RU 2013), vampire hunter Abraham Van Helsing in the series "Dracula" (US/GB 2013-2014) as well as the chairman of Adidas, Horst Dassler, in the FIFA drama "United Passions" (FR 2014). He had an important role in the Hollywood blockbuster "Avengers: Age of Ultron" (US 2015) as the super villain Baron Strucker. He played another baddie in the adaptation of the video game "Hitman: Agent 47" (US/DE 2015) before starring in the action comedy film "Central Intelligence" (US 2016) and the thriller "Stratton" (GB 2017), among others. In Michael Herbig’s "Ballon" (2018), Kretschmann played another lead role in a German film portraying a Stasi officer.