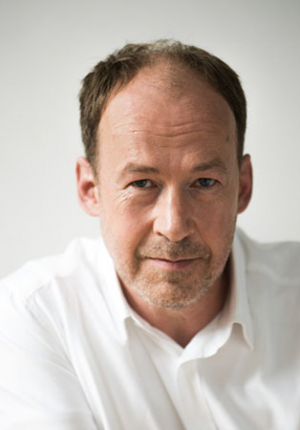 Ulrich Noethen was born on November 18, 1959, as Ulrich Schmidt in Munich. After attending actor's training at Stuttgart's Hochschule für darstellende Kunst he became a cast member at theatres in Freiburg (Breisgau), Köln and Berlin from 1985 on. After Berlin's Stattliche Bühnen were closed down, Noethen starred in the TV series "Die Partner" (1994-1995) and was seen in several TV movies like "Frau Bu lacht" (1996).

Later, Noethen also appeared in leading roles in movie productions. He played Harry Frommermann in "Comedian Harmonists" (1997) and received the Deutsche Filmpreis as well as the Bayerische Filmpreis for his performance, and he was seen as Kurt Tucholsky in "Gripsholm" (2000). Noethen also played the dreamy umbrella constructor Bruno Taschenbier in "Das Sams" ("The Slurb", 2001) and Dr. Johann "Justus" Bökk in the adaptation of Erich Kästner's children's novel "Das fliegende Klassenzimmer" ("The Flying Classroom", 2003).

He played Heinrich Himmler twice, in the elaborate "Der Untergang" ("Downfall", 2005) and in the Hitler-parody "Mein Führer" ("My Führer", 2007), and in two repeatedly awarded productions he appeared as the husband of Katja Riemann: the tragicomical family-drama "Das wahre Leben" ("Bumm! - Your Family, the Battlefield", 2006) and "Ein fliehendes Pferd" ("Runaway Horse", 2007) after the novel by Martin Walser. In the drama "Schattenwelt" ("Long Shadows") he appeared as a former terrorist of the RAF.

Ulrich Noethen also played some prominent roles in the TV productions "Die Luftbrücke" (2005) and "Teufelsbraten" (2007). In the TV movies about "Kommissar Süden" he played the title role.

He then starred in a row of high-profile TV productions: the comedy "Lügen haben linke Hände" (2011), the romance "Von Mäusen und Lügen" (2011), the biopic "Der Mann mit dem Fagott" (2011) and the acclaimed thriller "Das unsichtbare Mädchen" (2011).  On the big screen, he was seen as a demanding stage director who pushes a young actress to her limits in Christian Schwochow's drama "Die Unsichtbare" ("Cracks in the Shell", 2011), and in the Spring of 2012, he reprised his role as the shy Bruno Taschenbier for "Sams im Glück".

In 2013, Noethen starred in the theatrical release "Scherbenpark" ("Broken Glass Park"), playing a journalist who takes care of the orphaned daughter of a murder victim. His next film was the family-friendly children's book adaptation "Pettersson & Findus - Kleiner Quälgeist, große Freundschaft" (2014), in which Noethen plays an eccentric loner – not unlike his character in the "Sams" franchise –  who one day befriends a cat.

After taking on the role of a psychiatrist with detective instincts in the 2014 TV thriller "Neben der Spur - Adrenalin", Noethen played a husband whose wife falls for another woman in the TV drama "Ich will dich" (2014). He next starred as the spouse of the German chancellor in the satire "Die Eisläuferin" (2015, TV), and played a West-German army officer in the acclaimed miniseries "Deutschland 83" (2015). Following his turn as general attorney Fritz Bauer in "Die Akte General" (2016, TV), Noethen took on the role of Otto Frank in Hans Steinbichler's feature film adaptation of "Das Tagebuch der Anne Frank".

Also in the following years, Noethen remained extremely active as an actor. He took on leading roles in episodes of the series "Der Kriminalist" (2017) and "Unter Verdacht", played a police officer in the two-parter "Gladbeck" ("54 Hours", 2018), a film director in the three-parter "Ku'damm 59" (also 2018) and continued to impersonate the main character in the crime series "Neben der Spur". In 2019 he starred in the series "Charité" as legendary physician Ferdinand Sauerbruch. Christian Schwochow cast him in the Siegfried Lenz adaptation "Deutschstunde" ("The German Lesson", 2019) as NS-loyal village policeman and father of the young main character.