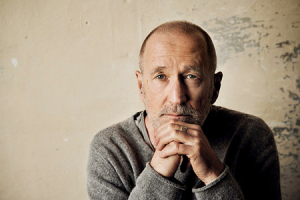 Peter Lohmeyer was born January 22, 1962, in Niedermarsberg in the Sauerland, as one of three sons of a Protestant pastor. He grew up in Hagen until his family moved to Stuttgart in 1974. He played football with VfB Stuttgart and was an active member of the grammar school theatre project group "Ebelu". In 1978, his family moved to Dortmund where Peter Lohmeyer played at the children's and youth theatre. From 1982 to 1984, he attended Westfälische Schauspielschule Bochum, but abandoned his studies to make his stage debut at Kammerspiele of Schauspielhaus Bochum.

In the summer of 1985, Ivan Nagel, the artistic director of Württembergisches Staatstheater, brought Lohmeyer to Stuttgart. Besides his acting career, Lohmeyer also dealt with used cars by Mercedes-Benz. In 1988, he went to Düsseldorf's Schauspielhaus but changed for Berlin's Schillertheater in 1990.

While still attending drama school, Lohmeyer was already recording radio plays and got his first leading role in July 1983 as prisoner Kotte who is out on parole in Alexander von Eschwege's TV movie "Noch ein Jahr und sechs Tage". Eschwege also put Lohmeyer in his 1985 film "Der Kampfschwimmer". In it, Lohmeyer played pool attendant Udo who develops fantasies about violence and is persuaded by his friend, a 15-year old wheelchair user, to blow up a gasoline tank.

In 1986, he collaborated with director Dominik Graf for the first time and played a gambler in the episode "Der kleine Bruder" of the TV crime film series "Der Fahnder". Lohmeyer also made successful performances in several of Graf's films: He played canteen cook Florian in the TV comedy "Tiger, Löwe, Panther" (1989) and the unsuccessful philosophy student and gambler Jojo alongside Anica Dobra in "Spieler" ("Gamblers", 1990). In the comedy "Neuner", Lohmeyer played the son of a contractor (Manfred Krug) who, instead of studying, scrounges his way through life, in the comedy "Hausmänner" (1991), he played the likable, diaper-changing Mike, and in Peter Sehr's history film "Kaspar Hauser" (1993) Lohmeyer played the part of Leopold von Baden. In "Einer meiner ältesten Freunde" (1994), a modern love triangle story, Lohmeyer portrayed the charming artist Charley Hart with the "monotonously floating voice" who pinches his friend's lover.

In "Die Eroberung der Mitte" (1995; directed by Robert Bramkamp), Lohmeyer casually played the ruthless psychotherapist Mark Stroehmer who exploits his patients. In 1994, he set up the film production company "Glück-Auf-Film" that funded the production of Lars Becker's film "Bunte Hunde" ("The Break", 1995) with 120.000 Deutsche Mark. But this dark ballad about three stolen car dealers starring Til Schweiger and Lohmeyer as cool hostage-taker Toni Starek turned out to be an economical flop. Nevertheless, Lohmeyer's second attempt in co-production was more successful: Lohmeyer starred as the crime novel author Theo Bono in the Hamburg-based low budget production "Die Mutter des Killers" ("The Killer's Mother", 1996).

In between times, Lohmeyer again and again starred in TV series, for instance, in 1995, in several episodes of the crime film series "Die Straßen von Berlin". Lohmeyer often switched between genres and role types when selecting his TV roles. Thus, he played a gangster in the award-winning TV law thriller "Der Ausbruch", a hard gangster in the TV crime film comedy "Liebe Lügen" ("Love Lies"), inspector Graf in the horror crime film "Sieben Monde" ("Night Time"), drug dealer Cramberg in "Der Pirat", and a police man in "Still Movin'". Furthermore, Lohmeyer won the Filmband in Gold for his performance as inspector Fanck who has to arrest a suspect, a shy beer delivery man (Joachim Król), in Finland, in the rail and road movie "Zugvögel .... Einmal nach Inari" ("Trains 'n' Roses", 1997).

In 1998, Frank Beyer put Lohmeyer in his TV docu-drama "Abgehauen", a film version of the best-selling book by Manfred Krug who describes his last days in the GDR in November 1976 in diary accounts. In the co-production "Frontera Sur" (1998), Lohmeyer played the bandoneon player Herman Frisch who had to emigrate to Argentina in 1880 for political reasons. In Sönke Wortmann's box office hit "Das Wunder von Bern" ("The Miracle of Bern", 2003), he played the leading role of Richard Lubanski, a returning prisoner of war, who cannot sympathize with his son – played by Lohmeyer's son Louis Klamroth – and his passion for football.

During the following years, Lohmeyer performed in a row of highly different films: As a smut peddler in "Süperseks" (2004), an eco activist in the satire "Am Tag als Bobby Ewing starb" ("The Day Bobby Ewing Died", 2005) or a chauffeur in "Vorne ist verdammt weit weg" (2007), he showed his comic side, while his single parent in "Oktoberfest" (2005) or his architect in "Vineta" (2006) again proved his talent for dramatic roles.

In 2008, Lohmeyer played the part of police detective Hanno Harnisch in three episodes of the TV series "Großstadtrevier", and in 2010, he was seen in a double role in the TV series "Allein gegen die Zeit". On the silver screen, he had a pivotal cameo in Fatih Akin's comedy "Soul Kitchen" (2009) and a supporting role as school principal in the youth drama "Bis aufs Blut – Brüder auf Bewährung" ("Stronger Than Blood", 2010). Alongside Leon Seidel, Heike Makatsch, Benno Fürmann, and Joachim Król, he starred in the movie adaptation of Mark Twain's "Tom Sawyer", which was released in late 2011.

In Hermine Huntgeburth's TV comedy "Eine Hand wäscht die andere" (2012), Lohmeyer had a supporting role as the main character's disabled brother-in-law; for the thriller "Blutadler" (2012, TV), he reprised the role of Hamburg's chief inspector Jan Fabel that he had played before in "Wolfsfährte" (2010, TV). Alongside Axel Prahl, Lohmeyer was seen in a leading role in the Ruhr valley comedy "Das Millionen Rennen" (2012, TV), about two neighbors who want to participate in a breeding pigeon race in South Africa. In 2013, he was seen for the last time in the crime series "Großstadtrevier" as detective superintendent Hanno Harnisch, whom he had played since 2008.

Lohmeyer also continued making appearances on the big screen. He played the villain in the children's thriller "Fünf Freunde 2" ("Famous Five 2", 2013) and had a double role in Robert Bramkamp's satire "Art Girls" (2013) as a pair of brothers who run a biotech company and sponsor a major art campaign. In addition, he had guest roles in the series "Polizeiruf 110" (2014) and "Koslowski & Haferkamp" (2014).

In the tragicomic feature film "Bach in Brazil" (DE/BR 2015), Peter Lohmeyer played an amusing supporting role as the snooty director of a Bach festival; for Alain Gsponer's highly acclaimed "Heidi" remake (DE/CH 2015), he took on the role of the kind-hearted servant of the Sesemann family. He also cut a distinguished figure as the Bishop of Stockholm in Mika Kaurismäki's award-winning "The Girl King" (2015), a film biography of Queen Kristina of Sweden.

In Adolf Winkelmann's youth story "Junges Licht" ("Young Light", 2016), he played an uptight pedophile in the Ruhr valley who preys on the boys in his neighborhood. Lohmeyer's next feature film, "Radio Heimat", released theatrically in November 2016, and based on the stories by Frank Goosen, was about four teenagers in the 1980s who finally want to prove their "masculinity". This film was also set in the Ruhr valley.

Various other appearances in TV productions followed, including in the crime series "Nord Nord Mord" (2017), in three episodes of Maren Kroymann's satirical show "Kroymann" (2018 and 2019), in the "Tatort" episodes "Die Guten und die Bösen" (2019, directed by Petra Katharina Wagner) and "Der schwarze Ritter" (2020, directed by: Didi Danquart), as well as again directed by Petra Katharina Wagner in the drama "Viel zu nah" (2017) as the ex-husband of a helicopter mother and in a supporting role as a star pianist, who is in prison for manslaughter, in the family drama "Martha & Tommy" (2020) with Senta Berger.

Previously, Peter Lohmeyer was seen on the big screen in Sandra Nettelbeck's tragicomedy "Was uns nicht umbringt" ("What Doesn’t Kill Us") which was prominently cast right down to the smallest roles and premiered at the Locarno Film Festival in August 2018. He acted as a narrator in the same year for "Gestorben wird Morgen" ("Very Senior - Attitude is everything"), a documentary about an unusual retiree paradise in Arizona, USA.

In November 2019, the debut feature and coming-of-age drama "Fünf Dinge, die ich nicht verstehe" ("Things I Don't Get") was released, in which Lohmeyer played the father of the pubescent main character. He then appeared in a smaller role alongside Lars Eidinger in Franziska Stünkel's acclaimed Stasi drama "Nahschuss" ("The Last Execution"), which was based on true events and premiered at the 2021 Munich Film Festival.

In addition to his work in front of the camera, Lohmeyer has been a regular onstage performer, including appearing as Death in "Jedermann" at the Salzburg Festival from 2013 to 2020.

Peter Lohmeyer was married to television chef Sarah Wiener from 2008 to 2014. He has a total of four children from two previous relationships.