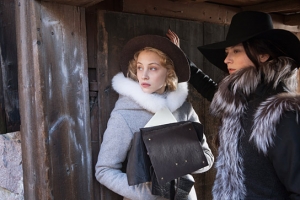 Sweden, 1632: In the middle of the Thirty Years' War and after the death of her father Gustav Adolf the heiress Kristina Wasa is crowned queen - she is just six years old. While the girl is brought up like a boy guaranteeing her a higher level of education, chancellor Axel Oxenstierna is leading the government affairs. On her 18th birthday Kristina comes into power. The young queen proves to be peace-loving and a free spirit. She ends the decades-long war, but because of her unorthodox governance she also makes many foes. In the sensitive Countess Ebba Sparre she finds a confidante. Sparre becomes Kristina's maid and soon also her lover. But the love of the two women doesn't stay secret. Since Oxenstierna wants to wed the queen to his son Johan, he sees their relationship as a serious threat to his plan.