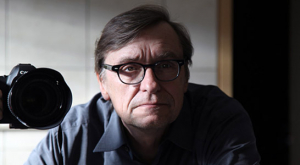 Adolf Winkelmann was born April 10, 1946, in Hallenberg, Westphalia, and grew up in Dortmund. After finishing school, he studied at Werkkunstschule Kassel from 1965 to 1968. From 1967 on, Winkelmann made his first experimental film and participated in the International Youth Biennial for Photography in Paris. In the winter of 1967/68, Winkelmann was invited to the Festival for Experimental Films in Knokke, Belgium. In 1969, Winkelmann joined a production collective that also ranked Jutta Schmidt, Winkelmann's wife for a short time, as a contributor. In 1973, Winkelmann left the collective.

In the beginning of the 1970s, Winkelmann started to work increasingly for TV productions. In 1978, he made his breakthrough with his movie debut "Die Abfahrer" ("On the Move", 1978). The tragicomic Ruhr area milieu study received rare reviews and won the German film award in silver. With "Jede Menge Kohle" (1981, also awarded with the silver film award), Winkelmann continued his "Ruhr area trilogy" and concluded it in 1992 with the acclaimed soccer movie "Nordkurve".

After the less popular film "Super" (1984), starring rock star Udo Lindenberg in one of the leading roles, Winkelmann tried his luck with the comic-like action comedy "Peng! Du bist tot!", a supposedly safe box office hit, yet the film did not meet the expectations with critics and movie goers alike. But with the two-part TV thriller "Der Leibwächter", Winkelmann returned to his successful ways. Furthermore, he won a silver Grimme award for directing the film. Winkelmann's next film was the highly praised football movie "Nordkurve" ("North Curve"). He then finished the TV production "Gefährliche Spiele" ("Dangerous Games"), a classic, elaborately produced TV thriller. Winkelmann's next TV movie also turned out to be a success: The mafia thriller "Der letzte Kurier", starring Sissi Perlinger, was filmed at original locations in Moscow and won the Grimme award in gold.

Winkelmann's next film, the Guildo Horn comedy "Waschen, schneiden legen" received less attention. Winkelmann then finished the virtual film panorama "Deutschland.Pict" for the media garden of the German pavillion at EXPO 2000 that was named by visitors as one of the highlights of the world exhibition. In 2007/08, Winkelmann caused a stir with the TV drama "Contergan" ("Side Effects). The two-part movie that deals with one the largest medical scandals in West German history could only be screened after a large number of legal disputes had been settled – but was received with overly positive reviews.

It took nine years until Winkelmann presented a new feature film with "Junges Licht" ("Young Light"), which is set in the Ruhr region in the year 1961 and chronicles the everyday life of a miner's family from the perspective of a 12-year-old boy.

Besides his work as a filmmaker, Adolf Winkelmann is a professor for film at Fachhochschule für Kunst und Design in Dortmund since 1979.