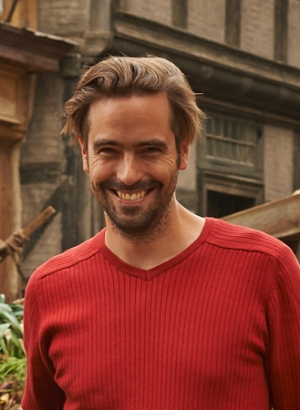 Alain Gsponer, born March 10, 1976, in Zürich, Switzerland, studied at Bern’s Schule für Gestaltung from 1996 to 1997 and simultaneously (since 1993) served as the co-operator of an arthouse cinema in Aarau. In 1997, he went to Film Academy Baden-Württemberg in Ludwigsburg where he also worked as a radio reporter during the time of his studies. His 55-minute long graduation film "Kiki & Tiger" ("Kiki and Tiger", 2002) won the Audience Award and the Interfilm Award at Saarbrücken’s Film Festival "Max Ophuels Preis". After the TV movies "Rose" (2005) that won the Eastman Promotional Award at the Hof International Film Festival as well as the 2007 German Television Award, the tragicomic film "Das wahre Leben" ("Life Actually", 2006, winner of the 2009 Grimme Award), starring Katja Riemann and Ulrich Noethen, and the "Polizeiruf 110" episode "Wie ist die Welt so stille" (2008), Gsponer finished his second feature-length film for the movie screen in 2009, the tragicomedy "Lila, Lila" based on Martin Suter’s novel by the same name.

His next feature was again based on a novel by Suter: "Der letzte Weynfeldt" (2009, TV) is the story of an art expert who gets blackmailed after being involved in a shady deal. Gsponer then directed the feature film adaptation of Otfried Preußler's popular children's novel "Das kleine Gespenst" ("The Little Ghost", 2013).

His next film in 2015 was also based on a children's book classic, Johanna Spyri's "Heidi", which was adapted for the big screen already several times. Gsponers adaptation won the Deutscher Filmpreis in the category "Best children's and youth film". With "Jugend ohne Gott" ("Godless Youth", 2017), based on Ödön von Horváth's novel, Gsponer addresses a slightly older audience. The story is set in a radically performance-oriented future, in which students have an adamant competition about securing a place at one of the elite universities, while less efficient people are being segregated. "Jugend ohne Gott" opened in German cinemas in August 2017.