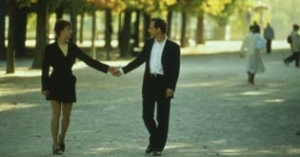 A hot summer in Berlin. A time of transition, radical changes, new departures. And in the jungle of the city personal feelings are thrown into confusion. Three young people become caught up in a tangled web of relationships, captivated by a strange sense of fascination which gradually becomes - Obsession.

Miriam is in her early twenties, a very musical character: she plays the organ in a band. Her dreams are of flying away, but what she really needs is some sort of calming influence over her chaotic relationship. She discovers that she has to reach her own decisions. Pierre is a scientist and a long-distance runner. He is engaged in medical research in a laboratory in Berlin and is a specialist on exploring the limits of endurance. John has come to Berlin to clear up a mystery in the family. He is looking for an old newsreel about a tight-rope performer who crossed Niagara Falls on a tight-rope in 1928. He has been unable to discover who the man is up to now because the only photograph he has is a shot of the man from behind. John is a stonemason by profession, and he has a Zimbabwean passport. When the police are about to deport him he goes into hiding.