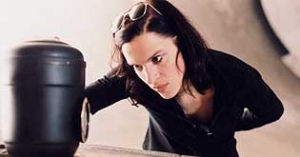 On October 3, 1942, the first rocket is launched into space. What the Germans did not know was that they also induced the birth of a ghost called Bianca, the ghost of the first rocket. Looking for her origins, Bianca travels through all of Germany – from the space flight′s birthplace in Peenemünde to its planned future home in Bremen. Following Bianca′s traces, the film develops a character study of the rocket. The film mixes documentary with fictional elements, as well as important with remote facts, seriousness with comedy, and technology with literature. For "Prüfstand 7", American author Thomas Pynchon for the first time authorised a film version in extract of his rocket novel "Gravity′s Rainbow".