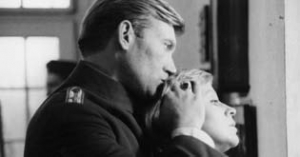 The Baltic states, 1919. The land is torn by civil war. Sophie lives in the Baltic castle of Kratovice. Together with a band of volunteers of different nationalities, who invade like an occupying army, Sophie's brother Conrad and his friend, Prussian officer Erich von Lhomond, arrive in Kratovice.

Sophie falls in love with Erich, who has resolved to “defend Western civilisation against the Bolsheviks” as a mercenary. She doesn't hesitate to confess her feelings to him. Erich backs away from such an explicit declaration of love. With her self-esteem humiliated and her honesty betrayed, Sophie now indiscriminately takes lovers amongst the officers – a spectacle watched in horror by Erich who throws himself into the final, futile military actions. Eventually, Sophie leaves the castle and defects to the insurgents. When Erich's squad captures these insurgents with Sophie amongst them, she demands that Erich carries out her execution.