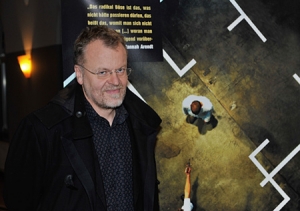 At the premiere of "Das radikal Böse" at the Cinestar Frankfurt a.M., January 7, 2014

Stefan Ruzowitzky was born in Vienna in 1961. He studied Theater and History and attended film courses and seminars by such industry figures as Syd Field, Zdenek Mahler and Vilmos Zsigmond. In the first half of the 1980s, he worked in the theater as a director and wrote radio plays for the Austrian broadcaster ORF. From 1987, Ruzowitzky worked as a freelance director and author for television, commercials and music videos. In 1996, he made his feature directorial debut with "Tempo", which won the Max Ophuels Award in 1997.

His second feature, "Die Siebtelbauern" ("The Inheritors", 1997), was sold to 50 countries and shown at numerous film festivals around the globe, winning many prizes including a Tiger Award in Rotterdam. "Die Siebtelbauern" was also Austria's entry for the Oscar for the Best Foreign Language Film in 1999. Since then, he has made the successful thriller "Anatomie" ("Anatomy", 2000), "Die Männer ihrer Majestät" ("All the Queen's Men", 2001) and "Anatomie 2" ("Anatomy 2", 2002).

In 2008, Ruzowitzky's "Die Fälscher" ("The Counterfeiters") - a drama based on the true story of Nazi concentration camp prisoners who were forced to produce fake foreign currency - won the Academy Award for Best Foreign Language Film.

The following year, Ruzowitzky caught wide attention with his documentary "Das radikal Böse" ("Radical Evil" DE/AT), in which he explores how ordinary young men became mass murderers as part of the Nazi regime. "Das radikal Böse" premiered at the Hofer Filmtage and was released in January 2014. 2017 first saw the release of Ruzowitzky's thriller "Die Hölle – Inferno" ("Cold Hell"), followed in March with the release of the English-language horror film "Patient Zero" (US/GB). For "Die Hölle - Inferno" he won a Romy Award in the category Best Director Fiction Film in 2017.

Ruzowitzky, together with Michael Krummenacher, then directed the end-time mini-series "8 Tage" ("8 Days"), which shows how different people deal with the impending end of the world. The first two episodes were shown in February 2019 at the Berlinale in the section Berlinale Special. The release on Sky Deutschland followed in early March 2019. Ruzowitzky's next feature film project was the film adaptation of Hermann Hesse's classic "Narziss und Goldmund" ("Narcissus and Goldmund", DE/AT 2020), about the lives of two young man attending a monastery school in the Middle Ages. The film with a prominent cast was released in cinemas in March 2020.