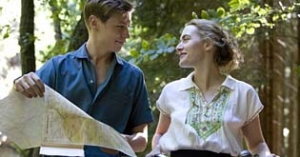 The Federal Republic of Germany in the 1950s. The entire country is overshadowed by the Second World War and German atrocities, yet hardly anyone is prepared to talk about it. Michael, 15, is growing up in the sticks. On his way home from school one day he suddenly feels ill. A woman comes to his aid. Michael has scarlet fever. At their next meeting, Michael and the significantly older woman cannot deny their mutual attraction and, before long, they are embroiled in a passionate affair. Hanna surprises Michael with her deep-seated enthusiasm for books. She loves to listen to him read to her for hours on end. All the while, Michael fails to notice that Hanna is illiterate. But then, one day, Hanna disappears without trace.

Several years later, Michael is studying law in Berlin. He is observing the trial of five former concentration camp guards when he suddenly discovers Hanna among the accused women. The defendants are on trial for the murder of 300 people. The people in the courtroom all regard Hanna Schmitz as a monster. Michael, however, is torn between his disgust at Hanna′s actions and the love he once felt for her – and evidently still feels. But then the trial takes a surprising turn that completely throws Michael off course. While all the other defendants deny the accusations, Hanna provides an honest record of the horrendous events …

A moving, touching drama based on Bernhard Schlink′s international bestselling novel that has been translated into 40 languages since its publication in 1995.