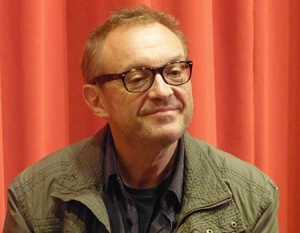 During an event at the Deutsches Filmmuseum on October 5, 2012

Josef Hader was born in Waldhausen on February 14 1962. He studied German literature and history before dropping out to pursue a stage career. Already in 1982, he wrote his first comedy program "Fort Geschritten", and his second program "Der Witzableiter und das Feuer" (1985) garnered him the "Salzburger Stier" award. His next programs also went on to win numerous accolades, including the "Deutsche Kleinkunstpreis", the Nestroy-Ring and the "Göttinger Elch".

In 1991, Hader and Alfred Dorfer wrote the satirical play "Indien" about unlike health inspectors Heinzi Bösel und Kurt Fellner, who travel through the countryside to check on local inns and restaurants. The play was a runaway success and was two years later adapted for the screen by director Paul Harather. The 1993 film "Indien" ("India"), again starring Hader and Dorfer, was internationally recognized and turned out to be one of the biggest box office successes of Austrian cinema. The same year, Hader also starred in Harather's made-for-TV film "Cappuccino Melange".

All the time, Hader continued his stage career and enjoyed success with programs like "Privat" and "Hader muss weg". After being one of the leads in "Der Überfall" ("Hold-Up"), Josef Hader took on the iconic role of detective Simon Brenner in the screen adaptation of Wolf Haas' novel "Komm, süßer Tod" ("Come Sweet Death", 2001), directed by Wolfgang Murnberger. The film got rave reviews and was a box office hit, and it made Hader one of the most internationally renowned Austrian screen actors. Hader would later reprise the role for "Silentium" (2004) and "Der Knochenmann" ("The Bone Man", 2009), again directed by Murnberger, and he also contributed to the screenplays of all adaptations.

His other screen credits include road movie "Blue Moon" (2002) and "Jagdhunde" ("Hounds", 2007). His portrayal of a fugitive criminal plagued by guilt in the TV production "Ein halbes Leben" ("Half a Life", 2000) won Hader a German Television Award and a Grimme Award. In 2010, he played a hospital physician in the acclaimed two-part TV feature film "Aufschneider", which was directed by David Schalko and written by Schalko and Hader. Hader also appeared in supporting roles in theatrical releases like "Die verrückte Welt der Ute Bock" (AT 2010), "Wie man leben soll" ("The Way to Live", DK/AT 2011), "Diamantenfieber" (AT 2011), Wolfgang Becker's "Ich & Kaminski" (D/B/F 2014) and in Jochen Alexander Freydank's "Kafkas Der Bau" ("Kafka's The Burrow", D 2014).

Hader again teamed up with director Wolfgang Murnberger for the Wolf Haas adaptation "Das ewige Leben" (2015), in which he once more played private detective Simon Brenner. He went on to play a retired police detective who has to solve the murder of a tourist in rural Austria in the TV production "Der Tote am Teich" (AT 2015).

Directed by Maria Schrader", "Vor der Morgenröte" ("Stefan Zweig - Farewell to Europe", DE/FR/AT 2016) starred Hader as author Stefan Zweig. The film got rave reviews, and his performance won Hader the German Film Critics Award as well as a nomination at the Austrian Film Awards. He next played the lead in the comedy "Die Migrantigen" (AT), which premiered at the 2017 Filmfestival Max-Ophüls-Preis, where it eventually won the Audience Award.

Hader made his feature film debut as director with the dark comedy "Wilde Maus" ("Wild Mouse"), which premiered in the competition of the 2017 Berlin IFF. Hader also played the leading role of a music critic who begins to restore a defunct rollercoaster after being fired while also plotting revenge on his former boss. The film received mostly positive reviews and was released theatrically in March 2017. Also in 2017, Josef Hader received the Dieter-Hildebrand-Preis. Issued by the City of Munich, it honors comedians who raise awareness for political and social issues with their work.