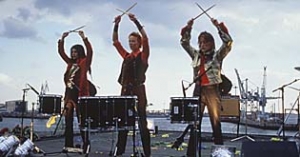 Four female cons form a rock band in prison as part of a rehabilitation programme. They use the chance of a performance at a policeman’s ball to escape. A music producer who has their demo tape notices the media coverage of the quartet and scents a business opportunity. And indeed, with his help the "Bandits" become overnight stars. They manage to elude capture at a concert by taking a tourist hostage. With their captive in the car, and detectives hot on their heels, they head for Hamburg's port, where a ship is waiting to sail them to America …

Borrowing from genre cinema (women's prison films, road movies) and using the aesthetics of music videos, Katja von Garnier brings to the screen musical girl power in the era of Riot Girls and post-feminism. Modelled on American girl gang films about renegade sisterhood, and with each protagonist an individual, "Bandits" stylises four different role models for female assertiveness, from sexy to militant – with the hunky man in the back seat serving as a passing sex object.