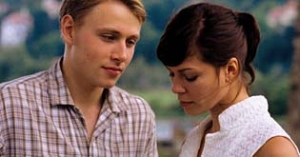 Dresden in the Spring of 1961– four months before the Berlin Wall was built. Siggi, aged 20, comes to Dresden to work as a set painter. He soon hopes to be able to take up studies at art school – thanks to the obligatory support and protection of his superiors. But his plans are foiled when he meets and falls in love with a young poet named Luise, whose poems are banned from publication in the recently founded GDR. Luise introduces Siggi to the "Red Cockatoo", a notorious nightclub that dares to play music from the West – something unheard of in the GDR at the time. Siggi soon makes friends with Wolle, Luise’s fun-loving husband.

Although there’s bound to be a Stasi informer among the group, passing on to the department every single detail about what goes on in the "Red Cockatoo", Siggi finds himself being drawn deeper into this clique of young beatniks, members of the ′awkward squad′, who each in their own way reject the new state – even as it struggles to establish itself.

In order to raise money for the club and Luise – in whom he is more in love than ever in spite of his friendship with Wolle – he steals porcelain figures and sells them in West Berlin. Things come to a head when Wolle is suddenly arrested. And when Siggi uses his ill-gotten gains to print a volume of Luise’s poetry without submitting it to the censor, he and Luise soon find themselves in the firing line. Should he stay or should he go?

Should he come to terms with things as they are or start afresh? It’s time for Siggi to make a decision.