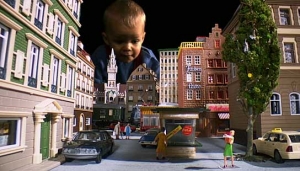 Munich - Secrets of a City

What do women ticket inspectors dream about? What happens when two men realise they have loved the same woman? What do two boys who want a star′s autograph find out? And what does the solar eclipse have to do with it all?

This is a film about Munich. Primarily, however, this is not a film about Munich. This is the fictive portrait of a city. Or the portrait of a fictive city. The city which everyone dreams of. And the dream which is every city. It is all about the way each individual′s biography is involved in the story of a city - and how the thousands of stories of a city also amount to something resembling a biography of that city. And the question asked is: What do you see when you take a magnifying glass to the city? And what pattern emerges when you follow the urban bustle?
So the film begins with a child′s view of the distant, immense and shapeless unknown, composed of so many names and forms, concealing strange promises. And it ends with the dead eyes of a blind man, to whom nothing but memories remain.