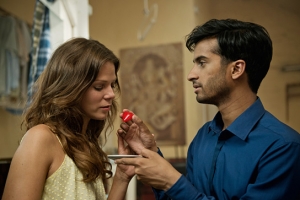 Maravan, aged 24, is a Tamil asylum seeker in Switzerland, working as casual help in a highly rated, gourmet restaurant in Zurich. It is also well below his own standards, because he is a gifted and highly passionate cook. In Sri Lanka his grandmother initiated him in the culinary arts, not least in the secrets of aphrodisiacal cuisine.

When Maravan loses his job his colleague Andrea persuades him into a deal of the special kind: a joint catering venture for love menus. They start by cooking for couples, to whom they are introduced by a sex therapist. But the success of "Love Food" soon gets out and around, and a very different, not to say much more lucrative, clientele shows its interest; men from the worlds of politics and business, some of whom prove to be quite shadowy.

Hired to cook for an arms dealer, who is also supplying both sides in the civil war in his homeland, Maravan seizes the opportunity to finally take his own fate in his hands …