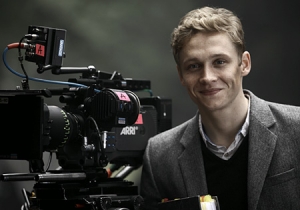 Matthias Schweighöfer, born March 11, 1981, in Anklam, as the son of actors Gitta and Michael Schweighöfer, is one of the most promising actors of recent German cinema. He already started acting in school productions and made his movie debut in 1997 in Andreas Dresen's "Raus aus der Haut" ("Changing Skins"). Schweighöfer then appeared in several TV productions such as the TV series "Dr. Stefan Frank" and "Siska", as well as in the critically acclaimed children's film "Spuk aus der Gruft". He became known to a larger audience in Zoltan Spirandelli's TV movie "Verbotenes Verlangen" (1999). Schweighöfer's performance as a school boy who starts an affair with his teacher won him the promotional award at the 2000 German Film Awards.

After "Verbotenes Verlangen", Schweighöfer starred in Martin Eigler's award-winning drama "Freunde" ("Trust Me") and in the fairytale-like TV movie "Küss mich, Frosch" ("Kiss Me Frog") that won an Emmy nomination in the US. In 2002, Schweighöfer finally made his breakthrough performance in the leading role in Dominik Graf's Henry James adaptation "Die Freunde der Freunde" which won the Grimme award in the category TV movie. Schweighöfer further consolidated his reputation as one of German cinema's up-and-coming stars with a striking supporting role in Gregor Schnitzler's much noticed movie "Soloalbum" ("Solo Album"), a role that won Schweighöfer the "New Faces Award 2003", and with a role in another film by director Dominik Graf, the critically acclaimed TV movie "Kalter Frühling" (2004). Despite his success, Schweighöfer is still rather particular about choosing his parts: instead of going with safe box office hits, he turns the heads of cinephiles with films such as the psychological drama "Kammerflimmern" ("Off Beat"): The intense and sophisticated portray of a paramedic who falls in love with the pregnant girl friend of an accident victim won him the 2004 Bavarian film award.

Furthermore, Schweighöfer appeared in classic drama parts in Uwe Janson's experimental, drama-like adaptations of "Baal" and "Lulu" while convincing move goers and critics alike as commune founder Rainer Langhans in the Uschi Obermaier biopic "Das wilde Leben" ("8 Miles High"). And in "Der Rote Baron" ("The Red Baron"), an adventure film about Baron Manfred von Richthofen that starts in cinemas at the end of 2007, Schweighöfer portrays another legendary figure of German contemporary history. But prior to that, Mathias Schweighöfer, playing a tourist in Morocco, had to face French cinema icon Jean-Hugues Anglade in the thriller "Fata Morgana" – a tough test for every young actor. In the same year, he played the Nazi lieutenant Herber in "Operation Walküre" ("Valkyrie") alongside Tom Cruise.

In 2009, Matthias Schweighöfer starred in even five top-class productions – and likewise in strongly varying roles: In the family drama "Der Architekt" ("The Architect"), Schweighöfer played the son of a famous architect who is confronted with his father's past life that is shrouded in mystery. In the TV movie "Mein Leben – Marcel Reich-Ranicki", based on the best-selling autobiography, he played the young literary critic Marcel Reich-Ranicki and was highly praised by critics for his performance. Furthermore, he played a sinister night train guard alongside Danny Glover and Leelee Sobieski in the international co-production "Night Train" (US/DE/RO), picked up his role of the photographer Moritz from the film "Keinohrhasen" ("Rabbit Without Ears") in the film's sequel, the comedy "Zweiohrküken", directed by Til Schweiger, and made a convincing performance as the legendary Hanseatic League pirate Gödeke Michels in the adventure film "Zwölf Meter ohne Kopf" ("13 Paces Without a Head").

Following his starring roles in the comical road movie "Friendship!" and the religious satire "3faltig", Schweighöfer presented his debut as director in the Summer of 2011: "What a Man" tells the story of a mellow guy who is dumped by his girl friend and then decides to man-up with the help of his macho buddy. The same year, Schweighöfer also starred in Detlev Buck's "Rubbeldiekatz", playing a struggling actor who is accidentally offered a female role – and takes it.

In 2012, Schweighöfer starred alongside Friedrich Mücke and Christian Friedel in the screen adaptation of Wladimir Kaminer's bestselling novel "Russendisko". The following year, he presented his second film as director in which he also took on the lead role: "Schlussmacher" ("Break Up Man") tells the story of Paul, employee of a separation agency, who ends romantic relationships for a living. Paul's own life is turned upside down when a hopeless romantic whom he dumped for a client decides to cling to him instead. In Austria, "Schlussmacher" won the 2013 Romy Award for Best Picture.

In 2013, Schweighöfer spoofed his own image by playing a fictional version of himself in Til Schweiger's "Kokowääh 2", and starred opposite Ruth Maria Kubitschek in the road movie "Frau Ella". The comedy "Vaterfreuden" (2014), Schweighöfer's third film as director and star, saw him playing a single man who suddenly wants to become a father by courting a woman who got pregnant with his donated sperm.

Following self-ironic cameos in "Irre sind männlich"(2014) and "Bibi & Tina: Voll verhext" (2014), Schweighöfer again directed himself as the lead in the 2015 box office hit "Der Nanny" ("The Manny"). The same year, he also produced the culture clash comedy "Highway to Hellas" (2015). Opposite Florian David Fitz, who also directed, Schweighöfer starred in the tragicomedy "Der geilste Tag" ("The Most Beautiful Day", 2016), in which two terminally ill men set out on an adventurous journey. The same year, he joined Til Schweiger, Jan Josef Liefers and Michael Herbig as one of the leads of the crime caper "Vier gegen die Bank", directed by Wolfgang Petersen.

In 2017, "You Are Wanted", a TV series produced by Amazon, was released with Schweighöfer playing a family father whose life spirals out of control when his computer is hacked. After two seasons the series was discontinued in 2018.

In 2018, Schweighöfer starred alongside Til Schweiger in the buddy action comedy film "Hot Dog" and then with Jella Haase in the comedy film "Vielmachglas" ("A Jar Full of Life"). In the same year, he was also a member of the ensemble in Thomas Vinterberg's military drama "Kursk" (BE/LU), a film about the sea damage of the Russian nuclear submarine K-141 Kursk in the year 2000. He collaborated again with Florian David Fitz in the societal comedy "100 Dinge" ("100 Things", 2018) about two friends who try to counter materialism by means of an unusual bet. In Jonathan Jakubowicz's biographical drama film "Resistance" (DE/GB; Start: 2019) about the legendary mime artist Marcel Marceau and his activism against the Nazis, Schweighöfer appeared in an unusually sinister role as the notorious Lyon-based Gestapo chief Klaus Barbie.