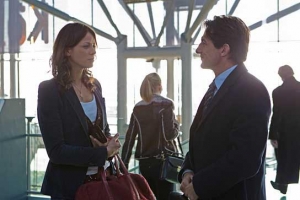 The film centers on two commuters travelling between Düsseldorf and Paris, investment banker Frank and best-selling novelist Patricia (played by Hans-Werner Meyer and Jessica Schwarz, respectively) who are brought together by chance at a turning point in both of their lives. Patricia is on the way to visit her French lover who is in a coma after a serious accident, while Frank is about to conclude a merger deal for the Charcuterie Albert with Swiss partners when he learns that the company had hoodwinked him with falsified accounts.

But not all is lost. Patricia finds a new friend amidst all of the sadness in her lover's wife Francoise (Sandrine Bonnaire), while Frank – to his own amazement – befriends the crooked butcher Albert (Gerard Jugnot) who is at least genuine about one thing: that the smell of his sausages are worth more than the rustle of fake bank notes.