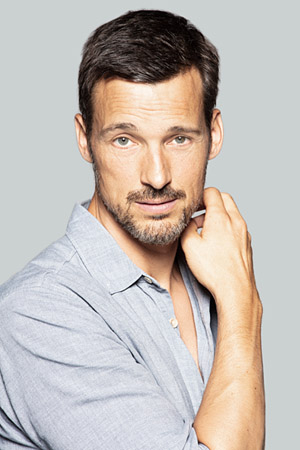 Florian David Fitz was born in Munich on November 20 1974. After graduating from school, he enrolled at the Boston Conservatory, where he majored in acting and music. Receiving his BA degree, her relocated to New York and tried to establish himself as an actor. A theatre gig brought him back to Europe: As member of a British theatre troupe, he performed "The Rocky Horror Picture Show" in Italy, Austria, Switzerland and Germany.

He then worked at the Münchner Volkstheater and finally made his screen debut in 1989 in an episode of the crime series "Der Bulle von Tölz". His breakthrough came with the lead role in the series "Verdammt verliebt" (2001/2002): For his performance as a young man who secretly falls in love with his best female friend, he was awarded the Rising Movie Talent Award at the Munich Film Festival. This was followed by supporting roles in feature films like "Mädchen Mädchen 2" ("Girls On Top 2", 2004), 3 Grad kälter" ("3 Degrees Colder", 2005), and popular TV works like "Liebe hat Vorfahrt" (2005) and "Ausgerechnet Weihnachten" (2005).

In 2006 Fitz starred in "Meine verrückte türkische Hochzeit": The TV comedy about a Berlin record store owner who tries everything to be accepted by the conservative family of his Turkish girlfriend was well received by critics and garnered Fitz a Grimme Award. The following years, he mainly worked in television, including the TV production " Fast ein Volltreffer" (2007) and the series "Doktor Martin" (2007-2009) and "Doctor's Diary – Männer sind die beste Medizin" (2008-2009).

In 2009, he returned to the big screen in the box office hit "Männerherzen" ("Men in the City"), starring alongside Til Schweiger, Wotan Wilke Möhring and Christian Ulmen. The following year, he played the lead in Ralf Huettner's road movie "Vincent will Meer" ("Vincent Wants to Sea"), which tells the story of a young man suffering from Tourette syndrome who flees from a mental institution and heads for the sea. His performance in the leading role won him a Bambi in 2010, his screenplay was awarded the Bayerischer Filmpreis. He was nominated in both categories in the German Film Awards competition in 2011 and won the Lola as "Best Actor".

Also in 2011, Fitz had a supporting role in the award-winning drama "Der Brand". He plays the lawyer of a rape victim, who resorts to risky tactics in order to bring her tormentor to justice. Lighter fare followed with "Männerherzen... und die ganz ganz große Liebe" ("Men in the City 2"), in which he reprised his role of hapless adman Niklas.

In 2012, Fitz played math genius Carl Friedrich Gauß in Detelv Buck's adaptation of the bestselling novel "Die Vermessung der Welt" ("Measuring the World"). He then appeared as the Son of God himself in the romantic comedy "Jesus liebt mich" ("Jesus Loves Me"), for which he also wrote the screenplay and took over directing duties. The film tells the story of a young woman, who falls for a kind and handsome man, not knowing that he is actually Jesus who was sent back to Earth in order to prepare the coming Apocalypse.

"Da geht noch was" ("Quality Time", 2013) had Fitz again proving his comic chops in the role of an exasperated son who has to take in his cantankerous father after the old man has been left by his wife. After playing a yoga instructor in Vanessa Jopp's ensemble comedy "Lügen und andere Wahrheiten" (2014), he displayed his dramatic talent as a terminally ill man who goes on one last bicycle trip with his closest friends in Christian Zübert's tragicomedy "Hin und weg" ("Tour de Force", 2014).

Also highly anticipated was Christoph Hochhäusler's thriller "Die Lügen der Sieger" ("The Lies of The Victors", 2014), in which Fitz plays an investigative journalist on the trail of a political scandal.

Subsequently, Fitz went to make his second film as both screenwriter and director. And what's more, the tragicomedy "Der geilste Tag" ("The Most Beautiful Day" 2016) also saw him star as one of the leads, a terminally ill man who goes on a last big trip together with his companion in misfortune (Matthias Schweighöfer).

His next film caused a public dispute: In "Terror – Ihr Urteil" (2016) a participative TV film directed by Lars Kraume, Fitz starred a fighter pilot who shoots down a hijacked airplane on his own authority in order to prevent a terrorist attack. He is put to trial for murder with the TV audience acting as judge and jury via televoting at the end of the film. A vast majority voted not guilty, thereby causing even a larger stir.

A month later, Fitz could be seen on the big screen in the comedy "Willkommen bei den Hartmanns". Playing alongside Senta Berger and Heiner Lauterbach he featured as the emotionally unstable son of a married couple who took in a refugee.

In Sönke Wortmann's satirical comedy film "Der Vorname" ("How About Adolf?", 2018), Fitz played a very different type of man, a smart yuppie, who causes outrage at a dinner party when he announces that he and his wife plan to name their child Adolf.

In December 2018, the societal comedy "100 Dinge" about two friends who decide to lock in all their belongings and only use one item per day for a period of 100 days was released in German cinemas. Fitz wrote, directed, co-produced the film and played the lead role.

After that, he was part of the ensemble of the comedy "Das perfekte Geheimnis" ("The Perfect Secret", 2019), followed by "Der Nachname" ("The Last Name", 2021), the sequel to the hit film "How About Adolf?". With director Hüseyin Tabak, he shot "Oskar's Dress" (2022), for which he also wrote the screenplay. He worked again with Sönke Wortmann on the teacher comedy "Eingeschlossene Gesellschaft" (2022). In fall 2021 Fitz was also in front of the camera for the father-son story "Wochenendrebellen" (release: 2023).