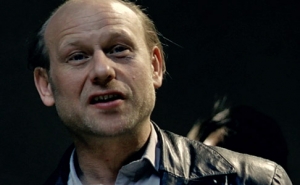 Bernd Michael Lade, born on December 24, 1964 in East Berlin, first completed an apprenticeship as a construction worker in his city of birth. He then studied acting at the Ernst Busch Academy of Dramatic Art. After graduating, Lade got a theater engagement in Frankfurt/Oder. From the mid-1980s he appeared in DEFA feature film and TV productions. He made a small appearance as a punk in Frank Beyer's "Bockshorn" (GDR 1984) - a part in which he basically played himself as a member of the East Berlin punk scene. In a smaller supporting role, he was part of the ensemble of the ironic social comedy "Kaskade rückwärts" ("Cascade Backwards", GDR 1984). Lade had his first major roles in two episodes of the crime series "Polizeiruf 110": In "Amoklauf" (GDR 1988), he played an unstable youth who willfully causes an accident, in the episode "Drei Flaschen Tokajer" (GDR 1989), he portrayed a youth mocked as a weakling whose clique becomes involved in a death. In addition to acting, Lade was a singer in the avant-garde band Cadavre Exquis from 1985 to 1990.

After the fall of the Berlin Wall, Bernd Michael Lade began studying directing at the Hochschule für Film und Fernsehen 'Konrad Wolf' (today: Filmuniversität Babelsberg Konrad Wolf) in Potsdam-Babelsberg in 1991. Four years later, he made his graduation film with "Rache" (1995). The drama about three punks imprisoned for trying to flee from the GDR, who are released after reunification and want to take revenge on their former traitor, premiered at the Munich Film Festival.

Throughout his studies, Lade kept appearing on screen. Among other roles, he played the lead character of the lovable, goofy village policeman "Köppe" in Detlev Buck's hit film "Karniggels" (1991). In 1992, he took on the leading role of Inspector Kain in the Dresden (from 2000 Leipzig) "Tatort" episodes. His partner was Peter Sodann as Chief Inspector Ehrlicher. The last episode of the successful investigator duo was broadcast in November 2007.

In addition to the "Tatort" films, Lade appeared in several television dramas: In the romantic drama "Verrückt nach dir" (1994), he was seen as a widower who hesitantly embarks on a new relationship, in the humorous romance "Liebe Lügen" (1997), he was a naive security guard who lets his flame instigate a robbery. In the romantic comedy "Vom Himmel das Blaue" (1999), he stood out as the shrewd owner of an photo agency who falls in love with a blind African woman and tricks her into believing he is also African. Mainly, however, Lade had regular guest roles in numerous series, such as "Doppelter Einsatz" (1996), "Wolffs Revier" (1998) and "Der letzte Zeuge" (2000).

Lade was seen only sporadically on the big screen. In the comedy "Looosers!" (1944), he had a role as an advertising agency employee who, with a buddy (Oliver Korittke), sells freely invented "insider information" to the competition. Director Peter Timm cast him in the comedy "Dumm gelaufen" ("Gone Wrong", 1997) as a shy young farmer who unexpectedly finds himself confronted with a lively prostitute and two corpses. In the slapstick comedy "Kai Rabe gegen die Vatikankiller" ("Kai Rabe vs. The Vatican Killers", 1998) he had a small part as the author. Lade found a strong dramatic feature film role in Didi Danquart's "Viehjud Levi" ("Jew-Boy Levi", DE/CH/AT 1999): in the drama set during the Nazi era, he embodied a system-critical young lad who unintentionally turns the inhabitants of a Black Forest village against a Jewish cattle dealer. The following year, he played a murderous ambulance driver for director Wolfgang Murnberger in the crime comedy "Komm, süsser Tod" ("Come Sweet Death", AT 2000).

At the Hofer Filmtage 2001, Lade presented his second directorial work, the crime thriller "Null Uhr 12," ("12 past Midnight") about five very different men and women who become the target of the police after a spectacular robbery. Lade played one of the suspects. In the years that followed, Lade again concentrated entirely on his television work, continuing his role in the "Tatort" films and appearing in several other TV series.

The drama "Transit" premiered at the Munich Film Festival in 2010, about a prostitute who wants to escape her milieu with the help of a truck driver. Lade played the vengeful pimp in this film. The following year, Lade had a supporting role in the multi-award-winning, critically acclaimed drama "Festung" (2011), about a family threatened with ruin by the violence of their father (Peter Lohmeyer). Also alongside Lohmeyer, Lade was seen in the TV thriller "Blutadler" (2012) in a key role as a washed-up ex-policeman with contacts to the Mafia. He had recurring roles in 2013 in the crime series "Der letzte Bulle" (as a fugitive felon) and in the 2014/15 in "Josephine Klick - Allein unter Cops." On the big screen, he played a Russian military psychiatrist in the novel adaptation "Buddha's Little Finger" (DE/CN, 2015).

Between 2008 and 2013 Lade also appeared on stage again in theater productions, for example at Berlin's Maxim Gorki Theater, Hamburg's Kammerspiele and at the Worms Nibelungen Festival in Dieter Wedel's new production of Friedrich Hebbel's "Die Nibelungen - born to die" (2013).

In October 2015, Lade's third film as a director premiered at the Hof Film Festival: "Das Geständnis," which he had already shot in 2011 in the rehearsal stage of the Maxim Gorki Theater, is set in the last year of the GDR and tells the story of an East Berlin murder investigation commission that is confronted with crimes that should not actually exist under socialism. In addition to directing and writing the screenplay, Lade also took on the lead role of the central investigator. "Das Geständnis" was released in cinemas in September 2016. Before that, in 2015, filming of Philipp Leinemann's TV movie "Willkommen bei den Honeckers" took place, in which Lade played an untrustworthy shopkeeper.

Afterwards, he appeared in a number of further TV series, among them the Berlin underworld series "Dogs of Berlin" (2018).

Bernd Michael Lade is married to actress Maria Simon. The pair have also been performing together with their neo-punk band Ret Marut.