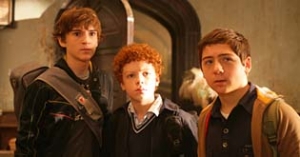 Once again, the three young amateur investigators Justus, Peter, and Bob have to solve a mysterious and dangerous case. On Justus′ birthday, the boys discover a video tape with Justus′ parents who have died a long time ago on it. Apparently, they wanted to give their son a hint for a rather intricate puzzle. Clearly, the three investigators joyously hurl themselves into this challenge. They travel to North California to the abandoned premises of the mad innovator Terrill who is under a curse. While trying to solve the mystery of the curse, the three friends have to deal with mean Sheriff Hanson who wants to prevent their investigations. At the same time, the Sheriff′s psychic daughter is after Bob because she believes to have recognized a soulmate from time immemorial in him.