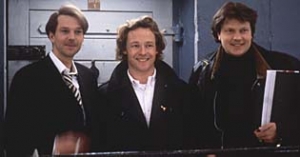 14 Days to Life
The ambitious lawyer von Seidlitz ends up in prison following an intrigue by his partner who uses this to to settle an old score. The initially arrogant inmate is painfully brought down to earth by his fellow prisoners. But he learns from the experience and doesn′t go under. His inner resistance against his fate grows and this also demands respect from the other prisoners. One of the inmates, Czernetzky, becomes his touchstone. His arrogance gets in the way and demands that he clean his shoes. This symbol exists for a long while between the two men. Von Seidlitz is blackmailed into organising an escape plan by a new prisoner who is trying to get to the haul Czernetzky once made. Von Seidlitz plays along as he is then able to get access to evidence about the involvement of his former partner in the trial which put him behind bars.